Leading representatives of KIEP, specializing in such issues as world trade, cooperation with international financial institutions, in particular with WTO also attended at the event.
During the conversation, parties discussed the issues of strengthening Uzbek-Korean relations, the prospects for Uzbekistan’s membership to WTO, and exchanged views on the further development of cooperation between the ISRS and KIEP.

Lee Jong-Yong noted that “breakthrough” reforms and transformations are ongoing in Uzbekistan under the leadership of the President of Uzbekistan Shavkat Mirziyoyev. Reforms in the framework of the “Strategy of Actions 2017-2021” characterized by their openness and consistency, contributing to the dynamic development of country and its foreign economic and policy ties.
Korean experts underlined that the relations between Uzbekistan and the Republic of Korea developing on the basis of strategic partnership. The agreements reached during the state visit of the President of Uzbekistan Shavkat Mirziyoyev to the Republic of Korea in November 2017 became a significant event in bilateral relations.

Representatives of KIEP, positively assessing the process of economic liberalization and currency regulation in Uzbekistan, noted that these measures play a key role in socio-economic growth, macroeconomic stability, and enhancing cooperation between Uzbekistan and international financial institutions, including the WTO. In this regard, KIEP experts stated that the Republic of Korea intensifies cooperation with Uzbekistan on its accession to the WTO.

At the end of the meeting, the experts of ISRS and KIEP also noted the importance of intensifying research cooperation and expressed interest in strengthening ties through organizing round tables and joint research projects. 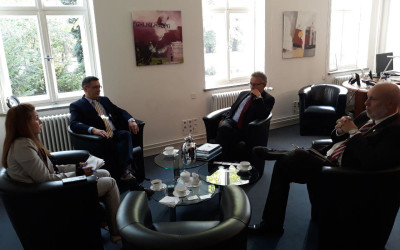 Experts of the Institute for Strategic and Regional Studies under the President of the Republic of Uzbekistan held meeting with Karl-Heinz Kamp, President of the German Federal Academy for security policy (BAKS) to Berlin.