Briefing at the Embassy of the Republic of Uzbekistan in Japan 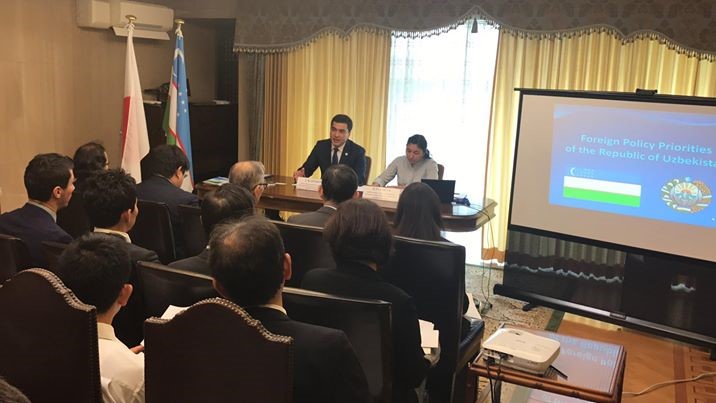 On October 11 2017 a briefing was held with participation of representatives of the ISRS and the Embassy of Uzbekistan in Tokyo, devoted to the issues of large-scale reforms being carried out in Uzbekistan within the framework of the adopted Strategy of Actions for 2017-2021, as well as the new foreign policy course of the President of the Republic of Uzbekistan Shavkat Mirziyoyev.

The event were attended by representatives of Japan socio-political, business and analytical circles.

During the briefing, participants exchanged their views on urgent issues of development of Uzbek-Japanese relations, especially in the sphere of attracting investments and tourism. In this context, the Japanese experts highly appreciated the reforms being implemented in Uzbekistan in financial and economic spheres, development of the tourism industry. In particular, briefing participants has estimated positively the launch of regular direct charter flights of the National Air Company "Uzbekistan Airways" from large Japanese cities to Samarkand. As a result, they stated a significant increase in the number of Japanese tourists to Uzbekistan.

In addition, it was stressed that the decision taken by the Government of Uzbekistan to open a free conversion of foreign currency is of strategic importance for securing the further development of the national economy. In this vein, representatives of Japanese business circles noted that this step contributes to increasing the interest of the Japanese business community in more active participation in the Uzbek market.

In general, the Uzbek-Japanese briefing was held in a constructive and friendly spirit, which once again demonstrated the great interest and the desire of the Japanese side to deepen bilateral cooperation between the Republic of Uzbekistan and Japan.