The essence and significance of strategic cooperation of Uzbekistan and Turkey 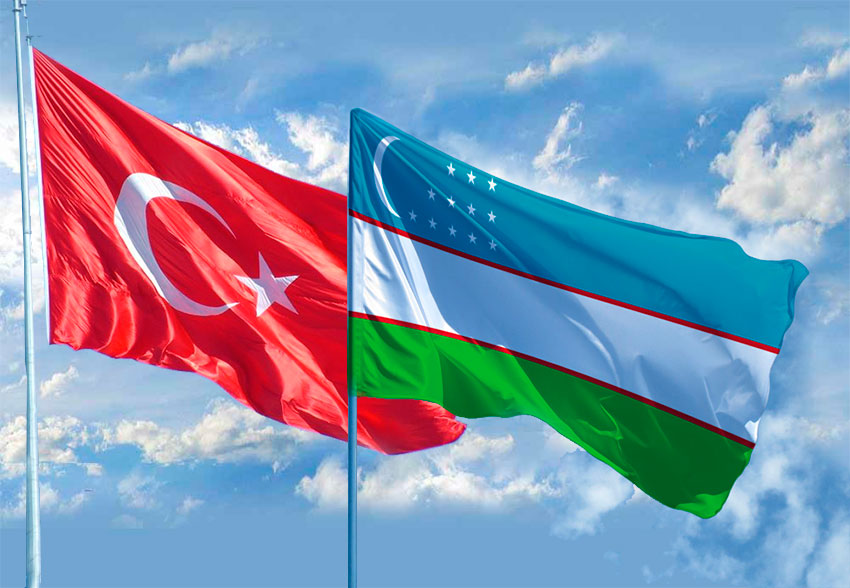 In the past three years proactive, open and pragmatic foreign policy of Uzbekistan, based on the principles of mutual respect and consideration of interests of partner states, has significantly contributed to the deepening and expanding mutually beneficial and multifaceted cooperation with countries of the near and far abroad, and international organizations.

This policy creates favorable conditions for successful and effective implementation of a comprehensive program of reforms and modernization of our country, providing necessary means for its harmonious integration into the community of the developed democratic states of the world.

Common language, religion, traditions and customs have given a new meaning for the cooperation between Uzbekistan with Turkey. Thanks to the efforts and political will of the leaders of the two countries, Uzbek-Turkish relations have been elevated to the level of strategic partnership.

In February 2020, the President of the Republic of Uzbekistan Sh.Mirziyoyev paid an official visit to Turkey by invitation of the Turkish leader R.T.Erdogan. This visit gave a powerful impetus for enhancing mutually beneficial dialogue.

During the visit, the first session of the Uzbek-Turkish Strategic Cooperation Council of the highest level took place in Ankara. It was established in accordance with the Joint statement of the heads of state in 2018. Following a visit to Turkey, President Sh.Mirziyoyev said that the meeting opened a new page in the history of friendly relations. In his turn, the head of the Republic of Turkey R.T.Erdogan noted that relations with Uzbekistan have achieved the strategic importance.

What is the essence of the strategic partnership with Turkey?

The deepening of bilateral cooperation will contribute to the implementation of the following medium and long-term development priorities of Uzbekistan.

First, this will provide ground for attraction of additional investments to the country, which is an important condition for development of its economy. In 2019, the volume of foreign direct investment to the Uzbek economy increased by 3.7 times compared to 2018 and reached $4.2 billion. According to the Center for economic research and reform data, it is planned to increase the annual inflow of investments to 11 billion by 2025 for modernization of key sectors of the national economy, including industry, energy, transport, and infrastructure, which are drivers of the economic growth and the formation of a competitive economy. It is necessary to highlight that the Turkish entrepreneurs are the most active foreign investors. In 2000-2017, the volume of their foreign investment increased 20 times, reaching $40 billion.

Certainly, the Uzbek-Turkish strategic partnership will facilitate mutual investment exchange. Referring to the figures, over the past 2 years more than 750 Turkish enterprises were created in Uzbekistan. By February of 2020 the number of enterprises with Turkish capital reached 1306 units. Since 2017 the amount of Turkish investment projects has increased 25 times, reaching more than $500 million. Among the successful Turkish projects: the production of solar panels, the creation of mobile diagnostic centers, the construction of the "center of Turkish business" and a business center in Tashkent and etc.

Second, cooperation with Turkey will allow to fully implement the country's export potential by diversifying markets of domestically produced goods. Up to now, export of goods and services has grown by 28% and amounted to $17.9 billion compared to $14 billion in 2018. However, according to forecasts, by 2025 the country has potential to increase its trade turnover to $66.4 billion with an export figure of $ 31.8 billion.

Due to its geographical location which is at the crossroads of Europe and Asia, Turkey could become a convenient transshipment point for the sale of Uzbek goods in the world markets. A four-hour flight from its territory opens access to the market with 1.5 billion people. In addition, due to its developed transport and logistics system, Turkey is among the top 20 countries in the world in the field of transport with an annual turnover of about $18 billion.

Turkey’s air infrastructure includes more than 100 airports (about 20 of them are international). Maritime infrastructure of the country, 70% of which washed by seas, is also highly developed.

At the same time, the implementation of the projects such as the Marmaray railway network, the Eurasian road tunnel, the Osmangazi and Sultan Selim Yavuz bridges will strengthen Turkey's central position as a “global transport hub”. Moreover, in December 2019, Ankara presented a “New logistics master plan” aimed at improving logistics services, and identifying alternative transport routes and creating new logistics chains.

At the same time, the “Middle corridor” fits well into the Chinese “One belt, one road” project supported by Uzbekistan (the Memorandum of understanding on the coordination of the “OBOR” and “Middle corridor” initiatives was signed in 2015). Extensive use of this route will open up huge opportunities for our country's exporters, boost the trade and economic activity of Uzbek producers on world markets.

At the same time, Uzbekistan and Turkey are actively interacting in promoting the multi-modal transport corridor “Asia–Pacific region embracing China–Kyrgyzstan–Uzbekistan–Turkmenistan–Azerbaijan–Georgia–Turkey-Europe” that makes it possible for our countries to increase their mutually beneficial trade potential. Moreover, this will contribute to achieve our goal ­– to increase the volume of cargo transit through the territory of Uzbekistan from the current 7 million tons to 23 million tons in 2030.

The transition of Uzbekistan and Turkey partnership to the strategic level of cooperation has already resulted in dynamic growth of: a) the mutual trade by 27%, reaching $2.5 billion. b) cargo traffic via the road transport by 33%, rail transport by 17%, and air transport by 42% compared to 2018.

At the same time, the leaders of both countries intend to increase the level of bilateral trade to $5 billion; the parties developed mechanisms of implementing this task. The issues of speeding up the preparation for signing the Agreement on preferential trade between Uzbekistan and Turkey are being discussed. The expanding the list of commodity items proposed for inclusion in this agreement, and the procedure for its practical application are being considered as well.

It is expected that these measures will greatly contribute to the implementation of the instructions of the presidents of the two countries.

Third, the common cultural and historical heritage as well as Turkey's advanced tourism industry open up broad prospects for mutually beneficial cooperation in this area. Tourism is considered as a driver of Uzbekistan’s economic development. The number of guests visiting our country has increased to 6.7 million people, which is 26% higher than in 2018. Furthermore, according to the adopted “Concept of the development of tourism in the Republic of Uzbekistan for 2019-2025”, it is planned to enhance the flow of tourists to 9 million people and the share of tourism in GDP from 2.8% (2017) to 5%.

The Republic of Turkey is the main partner of the Republic of Uzbekistan in tourism industry for the fact that it: 1) can provide a tourist audience represented by an 82-million population; 2) maintains global leadership in tourism for many years (among the top 10 most visited countries, 51.8 million tourists visited the country in 2019, and the revenue from this sector is $34.5 billion.); 3) has a developed industry infrastructure, advanced branding and management. Scrutiny of the successful Turkish experience and cooperation in tourism in the period of radical modernization and the liberalization of this sphere in Uzbekistan will play a positive role in realizing the tourism potential of our country.

In comparison with 2018, there was already a 54% increase (about 64 thousand) of the flow of tourists from Turkey to Uzbekistan in 2019 and 23% (about 168 thousand) from Uzbekistan to Turkey. In addition, the construction of the hotel complex ($3 million) by the Turkish company “Daiichi Elektronic” and 15-storey hotel by the “Calik Energy”, as well as the implementation of the project to improve the tourist infrastructure by the State Committee for Tourism Development of the Republic of Uzbekistan in collaboration with Turkish partners ($40 million) will increase our country's potential in this area.

Fourth, while large-scale projects on urbanization and renovation of cities and districts of the Republic of Uzbekistan are implemented, the business experience of the Turkish partners is essential. Thus, President Sh.Mirziyoyev set a strategic goal — to increase the level of country urbanization level or the share of the urban population from the current 51% to 60.0% by 2030. It will provide expanding Uzbek business with the necessary labor resources and increase the contribution of sectors of the economy with higher labor productivity to the GDP of Uzbekistan.

Meanwhile, referring to the data of the end of 2019, the level of urbanization in Turkey was 75%, which is largely due to the success in the construction industry. Turkish contractors represent about 5% of global construction market. 44 Turkish companies are among the 250 largest international construction contractors by “Engineering News Record”. According to this indicator, Turkey ranks second after China (65), but ahead of the United States (38).

The 7 Turkish companies are included in the list of the best construction companies in the world. In 2018, Turkish constructors implemented projects abroad worth of 20 billion. And for 7 months of 2019 this amount reached $ 5.6 billion.

Over the past 3 years the Turkish construction business has launched huge projects in our country. The company “Uzstroymaterialy” in cooperation with the Turkish partners has implemented 3 projects ($17.5 million). Residential complexes are being built in Andijan ($200 million). The project to produce aerated concrete in Navoi and Tashkent ($30 million) is underway. The construction of a multistorey parking lot in the capital is being completed ($6 million). All of these projects represent only a small part of Turkish-Uzbek cooperation in this industry.

Fifth, there is a great potential for partnership between both countries in the textile industry. This direction has been mainstreamed in terms of the President’s goals to increase the volume of exports of textile, clothing and knitwear products to $7 billion by 2025 (sales of complete textile products abroad in 2019 amounted to $2 billion.). This requires improving the quality and competitive advantages of local manufacturers’ products.

Turkey's global success and experience in this area could provide a good resource for improving the cotton processing and producing high-quality textile products by domestic entrepreneurs. In particular, the country covers 4.5% of the global clothing market and stands as one of the four largest exporters of textile products. The products of Turkish manufacturers are exported to 165 countries. According to official data, in 2019, Turkey’s ready-to-wear exports totaled $17.7 billion or amounted 10% of the country’s export volume. At the same time, 70% of ready-made clothing are exported to EU countries. In 2020 it is planned to increase this figure up to $19 billion. The fashion industry, which employs 20% of the labor force, generates 10% of the country’s GDP.

The “Uztukimachiliksanoat” in cooperation with Turkish investors is implementing 10 projects amounting to $156 million. Also sewing, knitting, dyeing industries were created in the Tashkent and Khorezm regions, “SUR Corporate wear” company is building a textile complex for the production of clothing ($56 million) and a number of projects are being implemented for the development of Uzbek textiles.

These mentioned areas of interaction are just a few ones among the big opportunities that states could use to strengthen their strategic partnership. The multifaceted Uzbek-Turkish cooperation is also being well advanced in education, medicine, automotive industry, energy, science, digital economy, security and culture. The Afghan issue is also important area of mutual interest. Similar positions of the states on resolving the long-standing conflict and their contribution to the socio-economic reconstruction of Afghanistan are the another platform for interaction.

Apart from the bilateral format of strategic partnership, Turkey and Uzbekistan are actively cooperating within the framework of multilateral structures including the UN, the Organization of Islamic cooperation, and the Turkic Council, which contributes to strengthening their ties in all levels of cooperation.

Thus, the dynamic growth of indicators of Uzbek-Turkish cooperation in all areas of interaction demonstrates the firm determination and strong interest of both sides in strengthening and developing interstate relations that will ultimately work for the well-being of the people of two countries.

Akramjon Nematov, First Deputy Director of the Institute for Strategic and Regional Studies under the President of Uzbekistan

Bakhodir Egamov, leading research fellow of the Institute for Strategic and Regional Studies under the President of Uzbekistan