First Deputy Director of ISRS Akramjon Nematov: The Samarkand Initiative is a concentrated expression of Mirziyoyev's political “doctrine”
“The Samarkand Solidarity Initiative for Common Security and Prosperity put forward by President of Uzbekistan Shavkat Mirziyoyev can be honestly called a key initiative that has received extensive support by all the members of the Organization and was articulated in the final part of the Summit outcomes - the Samarkand Declaration” said the First Deputy Director of the Institute for Strategic and Regional Studies (ISRS) under the Head of our state Akramjon Nematov for “Dunyo” Information agency.

The Tashkent Conference is an important contribution to the consolidation of the efforts of the international community in the fight against terrorism
Tashkent hosted a high-level international conference on “Regional cooperation of Central Asian countries within the framework of the Joint Action Plan for the Implementation of the UN Global Counter-Terrorism Strategy”.

New Horizons of Cooperation Between Uzbekistan and the European Union
Uzbekistan is on the eve of an important political event - the presidential elections in the country. This major political event was launched at the meeting of the Central Election Commission of the Republic of Uzbekistan, which took place on July 23, 2021.

Uzbekistan: The issues in improving the religious policy regulation system
oday one of the key directions of the reform strategy is liberalisation of the state policy in the sphere of religion, development of the culture of tolerance and humanity... 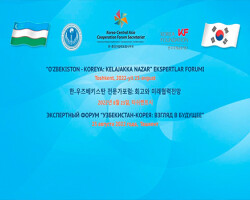 On August 23, Tashkent will host an expert forum "Uzbekistan - Korea: a look into the future", organized by the Institute for Strategic and Regional Studies under the President of the Republic of Uzbekistan with the assistance of the University of World Economy and Diplomacy in partnership with Korea-Central Asia cooperation Forum Secretariat. October 28 this year ISRS held a meeting with the Director of the International Institute for Iranian Studies "RASANAH" of the Kingdom of Saudi Arabia (KSA) Mohammed bin Saqr Al-Sulami. On September 6, Tashkent will host a Scientific and Expert Forum of the Shanghai Cooperation Organization on information security.