The President instructs to enhance amenities for cultural leisure of the population
President Shavkat Mirziyoyev has visited the Defense Ministry’s Cultural Enlightenment Center in Yashnabad district.

Leaders content with results of talks
Following the negotiations, Presidents Shavkat Mirziyoyev and Recep Tayyip Erdogan signed a joint statement on the outcomes of the first meeting of the Strategic Cooperation Council. A number of documents on cooperation in trade, economy and technology have also been inked.

Uzbekistan, Turkey launch new format of dialogue
Official delegations of Uzbekistan and Turkey have convened today in Ankara for the first session of the Strategic Cooperation Council.

Ankara hosts ceremony of welcoming the President of Uzbekistan
The official meeting ceremony has taken place at the Presidential Palace in the Turkish capital.

Foreign trade system analyzed, problems and urgent tasks defined
On February 5, President of the Republic of Uzbekistan Shavkat Mirziyoyev held a meeting to discuss priorities in reforming the system of foreign economic activity.

Uzbekistan’s President condoles with the President of China

Text of President Shavkat Mirziyoyev’s Address to the Oliy Majlis
Uzbekistan has been entering a new decade. Our achievements become history, life sets new requirements for us, great opportunities open up to spearhead transformation even deeper. Therefore, today, we should determine priority areas and tracks for the development of our nation in 2020 and for the next five years in general.

The President outlines principal challenges the government should address
At the joint session of the Legislative Chamber and Senate of the Oliy Majlis, the participants are considering the candidacy of the Prime Minister as well as an action plan of the Cabinet of Ministers for the near and long-term future.

Appointments and other organizational issues addressed at the Senate’s first session
The meeting participants have considered issues related to the structural organization of the Senate of the Oliy Majlis.

Condolences to the Sultan and the people of Oman
President of the Republic of Uzbekistan Shavkat Mirziyoyev has sent a letter to Sultan Haitham bin Tariq Al Said of Oman with deep condolences on the death of Sultan Qaboos bin Said.

Shavkat Mirziyoyev chairs expanded session of the Security Council
Later the same day, while at the Academy of Armed Forces, the President of Uzbekistan, the Supreme Commander-in-Chief of the Armed Forces Shavkat Mirziyoyev has chaired an expanded meeting of the Security Council to discuss issues related to the development and reform of the national army. 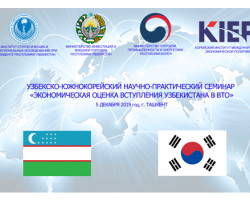 On December 5th, 2019 an Uzbek-South Korean scientific and practical seminar on the topic “Economic evaluation of Uzbekistan’s accession to the WTO” will be organized at the Palace of Youth Creativity in Tashkent. The ISRS held a meeting with the Director of the Institute of Central Asian Regional Economic Cooperation (CAREC) Sayed Shakel Shah.