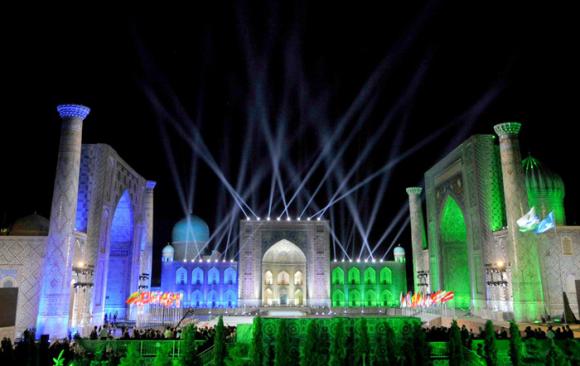 In the ancient Registan Square in Uzbekistan's Samarkand where students from Islamic seminaries used to pray centuries ago, oriental music performed by musicians from all over the world echoed under the dome of magnificent mosques.

The XII Sharq Taronalari International Music Festival, one of the most significant music events in Central Asia, which was held in Samarkand, Uzbekistan's second largest city from August 26 to 30, attracted hundreds of local audiences who zealously sat in the open, enjoying the rhythms and many who did not get the tickets stood outside the square for hours in order to hear the music originating from the stage. This year, the music festival featured 146 musicians from 33 countries, including China.

Zhu Zhizhong, director of Professional Committee of Chinese Folk Music and Art, is one of the nine international juries of the music festival. Zhu told the Global Times that the programs of this year's festival are at "a very high standard and full of variety."

"The show has presented music from different cultures including nomadic culture, farming culture, hunting culture and many others," Zhu said.

"Most importantly, this forum has turned into a unique platform of cultural cooperation and dialogue among various civilizations, peoples and nations," he added.

Zhu noted to the Global Times that in the era of globalization, how to inherit the traditional music is an urgent and difficult task for people all over the world. Zhu  commended the efforts that Uzbekistan has made in organizing this music festival, which he said would be beneficial for preserving traditional music.

While the forecasts being made are that "future music will be created by machines," the Uzbek president said at the event, "However, all of us are well aware that not even the most advanced machine can replace the human breath, motives coming from the depth of his heart, the charm of a live sound and the real art."

The Sharq Taronalari music festival, meaning "Melodies of the East," has been held every two years in Samarkand since 1997. This year, it has performers from countries including China, Argentina, Afghanistan, Hungary, Spain, Mongolia, Myanmar, Azerbaijan, Pakistan, Portugal, Russia and many others.

In the framework of the festival, International Scientific-Practical Conference: Prospects for developing traditional music art of nations of the Orient was held simultaneously. Musicians gathered in the daytime to exchange views regarding the inheritance of traditional music and how to promote it to the young generation.

According to President Mirziyoyev, as a unique humanistic phenomenon, "the art of music has endless possibilities in terms of upbringing and comprehensively developing a new generation."

"The youth, who are into art, have a high attitude towards life, show a high respect for national customs and traditions, as well as universal values.

"And I am confident that they will step onto the stage as a generation capable of saving the world from spiritual degradation, the one who will glorify mutual accord and unity," said Mirziyoyev.

The Global Times reporter noticed that many parents brought their young kids to the festival. Those kids who had this valuable chance of listening to the world-class performance could very likely become the promoter of the traditional music when they grow up.

Zhu said that China has a huge variety of music. "Therefore, we should shoulder more responsibility in promoting traditional music," he said.

According to Zhu, it is easy for many traditional Chinese music types to gain recognition overseas as they share similarities with other countries' music culture.

He took Muqam as an example. Muqam is a musical instrument that is widely used by Uyghur ethnic group in Northwest China's Xinjiang Uyghur Autonomous Region.

This instrument is also used in countries including Uzbekistan, Turkmenistan and Azerbaijan, and is played in different ways. But still many similarities could be perceived, Zhu said. He added that like Muqam, many traditional Chinese music cultures are cross-border.

"These cross-border cultures provide us with great conveniences in terms of cultural exchange and making friends... And when preserving the traditional music, it's necessary to take reference from each other and develop together," Zhu stressed.

Music exchange under the BRI

In addition to the increasingly frequent commercial exchanges among countries along the Belt and Road, cultural exchanges also take place.

Ding Zhaonian's Qingci Ouyue music group from East China's Zhejiang Province also performed at this year's event. Ding, deputy director of the Qingci Ouyue music group, told the Global Times that his group has elaborately prepared for this music festival, through which they hoped more local people get to know about traditional Chinese music.

The group's instruments are quite unique. They are plates, bowls that are made of green porcelain. While plates and bowls are normally used for dining, Ding's group innovatively instilled music function into them.

"Green porcelain was once an important product in the ancient Silk Road. This time, we use it as a musical instrument to promote traditional music to audiences along the Silk Road," Ding told the Global Times.

Uzbekistan is an important country under the China-proposed Belt and Road Initiative. The bilateral relations between China and Uzbekistan have seen leap-forward development over the past few years.

This is the first time that Ding's group visited Uzbekistan. He noted to the Global Times that their group has seen more invitations from countries along the Belt and Road in recent years, and has received warm welcome from foreign audiences. "Our instrument is good-looking, easy to use and pleasant to the ear," he said. "Also, music serves as a bridge to help the outside world know more about China."

Zhu said that the traditional music is the treasure left by ancestors and Chinese musicians should make use of this treasure to make new friends along the Belt and Road, which carries great significance.

He also pointed out that it's also necessary for people to think about how to combine music exchanges with tourism as well as how to let musicians build their music as a brand.

"This is the most urgent task nowadays," Zhu said, adding that traditional music can be better preserved only if these musicians live a comfortable life. Therefore, he said, in order to preserve traditional music,  it's necessary to popularize it so that musicians can make a good living out of it. "One of the most important characteristics of music should be productization," Zhu said.