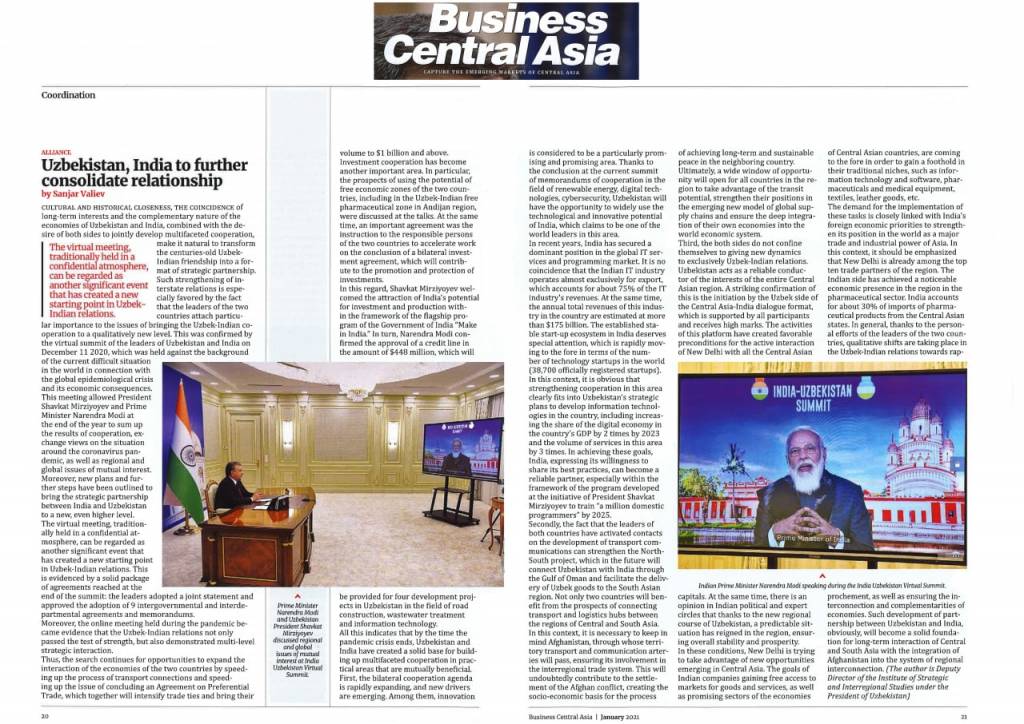 India’s Business Central Asia has published an article by Sanjar Valiev, Deputy Director of the Institute of Strategic and Regional Studies under the President of Uzbekistan.

The article tells about the relations between Uzbekistan and India in various areas.

Below is the text of the article.

“Cultural and historical closeness, the coincidence of long-term interests and the complementary nature of the economies of Uzbekistan and India, combined with the desire of both sides to jointly develop multifaceted cooperation, make it natural to transform the centuries-old Uzbek-Indian friendship into a format of strategic partnership. Such strengthening of interstate relations is especially favored by the fact that the leaders of the two countries attach particular importance to the issues of bringing the Uzbek-Indian cooperation to a qualitatively new level. This was confirmed by the virtual summit of the leaders of Uzbekistan and India on December 11, 2020, which was held against the background of the current difficult situation in the world in connection with the global epidemiological crisis and its economic consequences.

This meeting allowed President Shavkat Mirziyoyev and Prime Minister Narendra Modi at the end of the year to sum up the results of cooperation, exchange views on the situation around the coronavirus pandemic, as well as regional and global issues of mutual interest.

Moreover, new plans and further steps have been outlined to bring the strategic partnership between India and Uzbekistan to a new, even higher level.

The virtual meeting, traditionally held in a confidential atmosphere, can be regarded as another significant event that has created a new starting point in Uzbek-Indian relations. This is evidenced by a solid package of agreements reached at the end of the summit: the leaders adopted a joint statement and approved the adoption of 9 intergovernmental and interdepartmental agreements and memorandums.

Moreover, the online meeting held during the pandemic became evidence that the Uzbek-Indian relations not only passed the test of strength, but also demonstrated multi-level strategic interaction.

Thus, the search continues for opportunities to expand the interaction of the economies of the two countries by speeding up the process of transport connections and speeding up the issue of concluding an Agreement on Preferential Trade, which together will intensify trade ties and bring their volume to $1 billion and above. Investment cooperation has become another important area. In particular, the prospects of using the potential of free economic zones of the two countries, including in the Uzbek-Indian free pharmaceutical zone in Andijan region, were discussed at the talks. At the same time, an important agreement was the instruction to the responsible persons of the two countries to accelerate work on the conclusion of a bilateral investment agreement, which will contribute to the promotion and protection of investments.

In this regard, Shavkat Mirziyoyev welcomed the attraction of India's potential for investment and production within the framework of the flagship program of the Government of India "Make in India." In turn, Narendra Modi confirmed the approval of a credit line in the amount of $448 million, which will be provided for four development projects in Uzbekistan in the field of road construction, wastewater treatment and information technology.

All this indicates that by the time the pandemic crisis ends, Uzbekistan and India have created a solid base for building up multifaceted cooperation in practical areas that are mutually beneficial. First, the bilateral cooperation agenda is rapidly expanding, and new drivers are emerging. Among them, innovation is considered to be a particularly promising and promising area. Thanks to the conclusion at the current summit of memorandums of cooperation in the field of renewable energy digital technologies, cybersecurity Uzbekistan will have the opportunity to widely use the technological and innovative potential of India, which claims to be one of the world leaders in this area.

In recent years, India has secured a dominant position in the global IT services and programming market. It is no coincidence that the Indian IT industry operates almost exclusively for export, which accounts for about 75% of the IT industry's revenues. At the same time, the annual total revenues of this industry in the country are estimated at more than $175 billion. The established stable start-up ecosystem in India deserves special attention, which is rapidly moving to the fore in terms of the number of technology startups in the world (38,700 officially registered startups).

In this context, it is obvious that strengthening cooperation in this area clearly fits into Uzbekistan's strategic plans to develop information technologies in the country, including increasing the share of the digital economy in the country's GDP by 2 times by 2023 and the volume of services in this area by 3 times. In achieving these goals, India, expressing its willingness to share its best practices, can become a reliable partner, especially within the framework of the program of achieving long-term and sustainable peace in the neighboring country. Ultimately, a wide window of opportunity will open for all countries in the region to take advantage of the transit potential, strengthen their positions in the emerging new model of global supply chains and ensure the deep integration of their own economies into the world economic system.

Third, both sides do not confine themselves to giving new dynamics to exclusively Uzbek-Indian relations. Uzbekistan acts as a reliable conductor of the interests of the entire Central Asian region. A striking confirmation of this is the initiation by the Uzbek side of the Central Asia-India dialogue format, which is supported by all participants and receives high marks. The activities of this platform have created favorable preconditions for the active interaction of New Delhi with all the Central Asian capitals.

At the same time, there is an opinion in Indian political and expert circles that thanks to the new regional course of Uzbekistan, a predictable situation has reigned in the region, ensuring overall stability and prosperity.

In these conditions, New Delhi is trying to take advantage of new opportunities emerging in Central Asia. The goals of Indian companies gaining free access to markets for goods and services, as well as promising sectors of the economies of Central Asian countries, are coming to the fore to gain a foothold in their traditional niches, such as information technology and software, pharmaceuticals and medical equipment, textiles, leather goods, etc.

The demand for the implementation of these tasks is closely linked with India's foreign economic priorities to strengthen its position in the world as a major trade and industrial power of Asia. In this context, it should be emphasized that New Delhi is already among the top ten trade partners of the region. The Indian side has achieved a noticeable economic presence in the region in the pharmaceutical sector. India accounts for about 30% of imports of pharmaceutical products from the Central Asian states. In general, thanks to the personal efforts of the leaders of the two countries, qualitative shifts are taking place in the Uzbek-Indian relations towards rapprochement, as well as ensuring the interconnection and complementarities of economies. Such development of partnership between Uzbekistan and India, obviously, will become a solid foundation for long-term interaction of Central and South Asia with the integration of Afghanistan into the system of regional interconnection”.