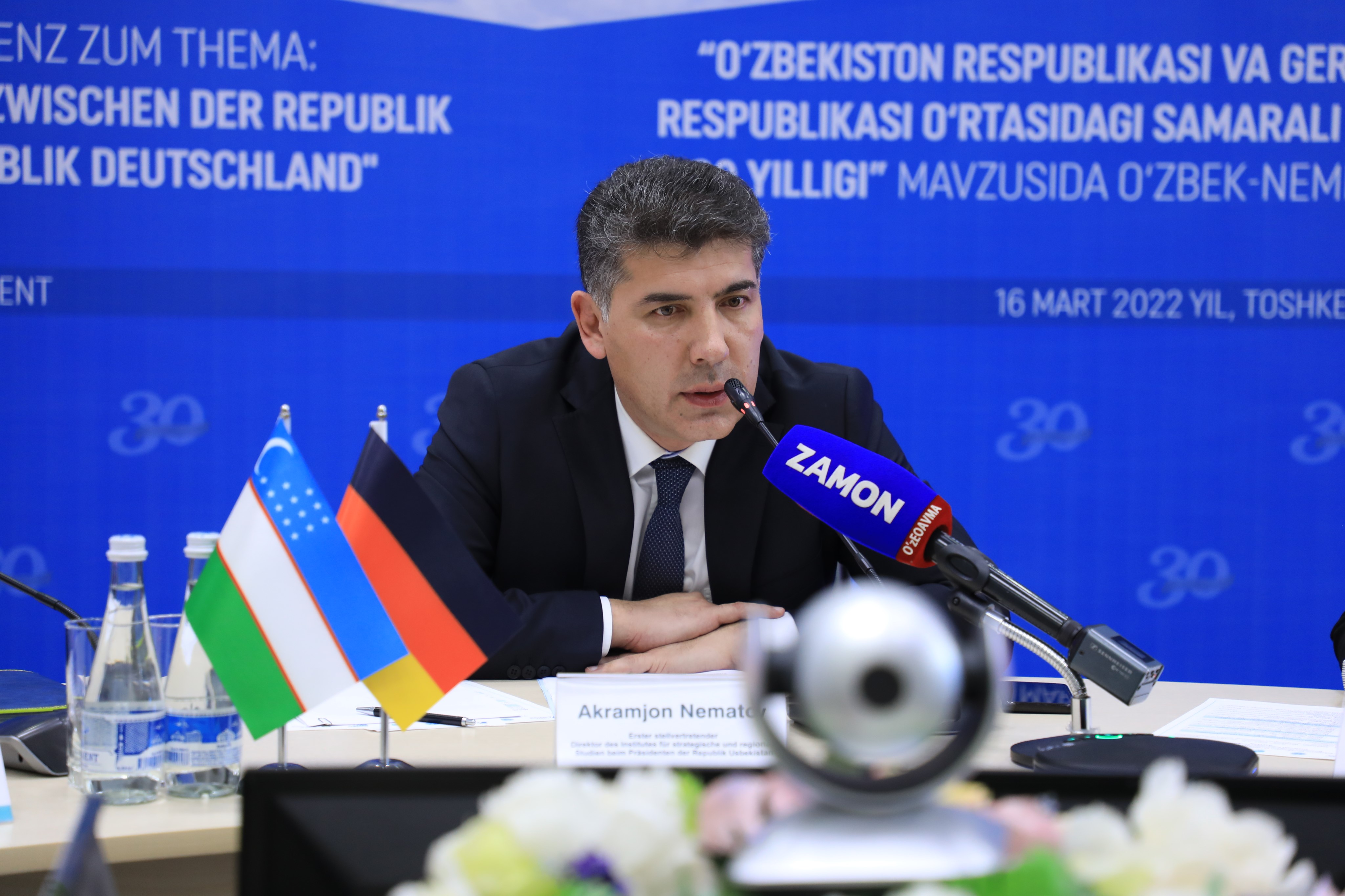 Akramjon Nematov, First Deputy Director of the Institute for Strategic and Regional Studies under the President of the Republic of Uzbekistan (ISRS), during a conference on “30 years of fruitful relations between Uzbekistan and Germany”, described in detail the prospects for Uzbekistan – Germany cooperation at the present stage.

As the representative of the ISRS noted, “all these years, relations between the countries were accompanied by a trusting dialogue, deep mutual understanding, practical orientation of working contacts and a cooperation agenda”.

“Germany is the largest partner of Uzbekistan in Europe. As a result of cooperation with Germany, dozens of joint projects have been implemented and are being implemented, which have become an important part of the reforms being carried out in our country”, he stressed. 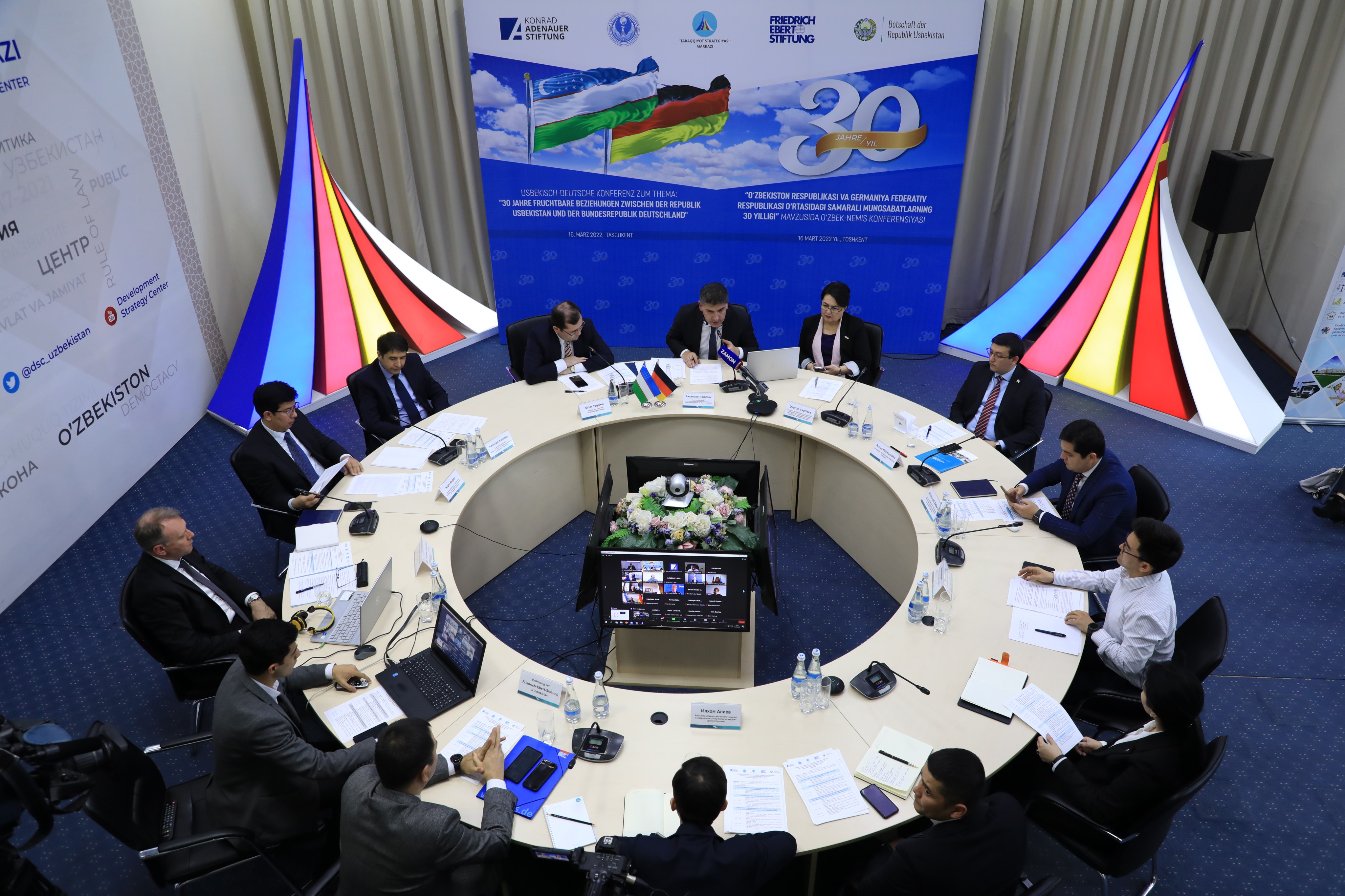 In this context, it is important to emphasize that thanks to the initiatives of the President of Uzbekistan Shavkat Mirziyoyev to deepen relations with such advanced and leading countries as Germany, the interaction between Tashkent and Berlin has entered a new stage of development.

It was stated that it is the well-established political dialogue at the highest level that serves as a driver for the intensification of multifaceted cooperation between the two countries in various fields of mutual interest.

There is an intensive exchange of visits of parliamentary delegations. German parliamentarians regularly participate in various events dedicated to the ongoing political and legal reforms in our country.

The parties give priority to the promotion of cooperation projects with leading German companies and banks in trade, investment, high technology, industry, agriculture and other sectors.

Germany is a major trade partner of Uzbekistan in Europe. In 2021, the mutual trade turnover between Uzbekistan and the European Union amounted to $3.85 billion, 25% of which came from trade with Germany.

The volume of bilateral trade between Uzbekistan and Germany in 2016-2021 increased by 46% from 529.1 to 762.3 million dollars. An important indicator in the economic area is a significant increase in Uzbek exports to Germany by about 40%.

Germany is also the third major investor in Uzbekistan after Russia and China. To date, within the framework of the Investment Program, about 60 projects worth 5 billion euros are being implemented in our country with the participation of German business circles in such key sectors of the economy as mining, agriculture, agrochemistry, pharmaceuticals, etc.

Moreover, over the past 5 years, there has been an increase in German enterprises. If in 2016 about 120 enterprises with the participation of German investors operated in Uzbekistan, today their number has reached 201.

Akramjon Nematov stressed that the parties are consistently building up cooperation in such areas as education, culture and tourism, which meet the interests of both countries. A key role in strengthening relations in these areas is played by such German organizations as the Konrad Adenauer Foundation, Friedrich Ebert Foundation, Hanns Seidel Foundation, as well as branches of Goethe-Institut, Institute for International Cooperation of the Deutscher Volkshochschul-Verband e.V.

According to the ISRS First Deputy Director, the support of the German side of Uzbekistan’s initiatives to deepen cooperation in Central Asia and strengthen regional security is particularly impressive.

It should be noted that Berlin recognizes the special role of Uzbekistan in the region as a factor of stability and security.

In this context, the role of Germany in the adoption of the EU Strategy for Central Asia in 2019 was especially noted. This document gave new momentum to the further development of Uzbekistan – European partnership.

In general, the ISRS representative concluded, “the fruitful partnership between Uzbekistan and Germany over this historical period demonstrates the desire and commitment of Tashkent and Berlin to further strengthen bilateral cooperation. Such cooperation is in the true interests of our societies”.

The conference took place on March 16 this year in Tashkent in a hybrid format with the online connection of some participants. The event was organized by the Institute for Strategic and Regional Studies under the President of the Republic of Uzbekistan, Development Strategy Center, Embassy of Uzbekistan in Germany, representative offices of the Konrad Adenauer and Friedrich Ebert Foundations.