As the representative of the ISRS emphasized, in recent years, thanks to the reforms initiated by the President of Uzbekistan Shavkat Mirziyoyev, relations between the two countries have significantly intensified. Mutual high-level visits of the heads of both countries and the holding of regular bilateral online summits have become the basis for saturating the agenda of multifaceted cooperation.

As a result, as Sanjar Valiev noted, the trade turnover of the two countries in the period 2017-2021 increased by 3.5 times. At the same time, it was possible to significantly balance the trade balance by expanding the export of Uzbek products to the Pakistani market by 10 times.

Assessing the prospects for expanding mutual trade, Sanjar Valiev noted that the shortest, simplest and most economical way to the Arabian Sea and the Indian Ocean for the Central Asian states, in particular for Uzbekistan, runs through Pakistan.

According to the calculations, «although Pakistani ports such as Karachi, Qasim and Gwadar are only 2,000 km away, today Uzbekistan uses seaports located in the Pacific Ocean or the Baltic Sea at a distance of 4,000 and 5,000 km».

According to preliminary estimates, in the case of organizing part of the transportation through the southern direction, the cost of transporting one container from Tashkent to Karachi will be approximately $ 1400-1600, while on current routes this price reaches $ 2600-3000, which is almost 1.5-2 times more.

«Thus, new joint transport and transit projects can become a factor in economic recovery and recovery in the post-period for the countries of Central and South Asia», the expert concluded.

On December 9-10, 2021, The Institute for Strategic Studies of Islamabad in a hybrid format organized the first expert meeting «Islamabad Conclave – 2021» on the topic: «Peaceful and prosperous South Asia».The event was attended by over 40 prominent scientists and experts from Pakistan, China, Qatar, Kazakhstan, Nepal, Indonesia, Norway, as well as representatives of international organizations and the diplomatic corps. 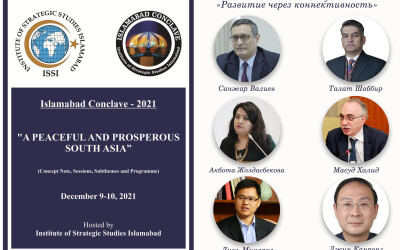 The formation of a functional trade corridor leading to sea routes will serve to increase the volume of bilateral trade between Pakistan and Uzbekistan.