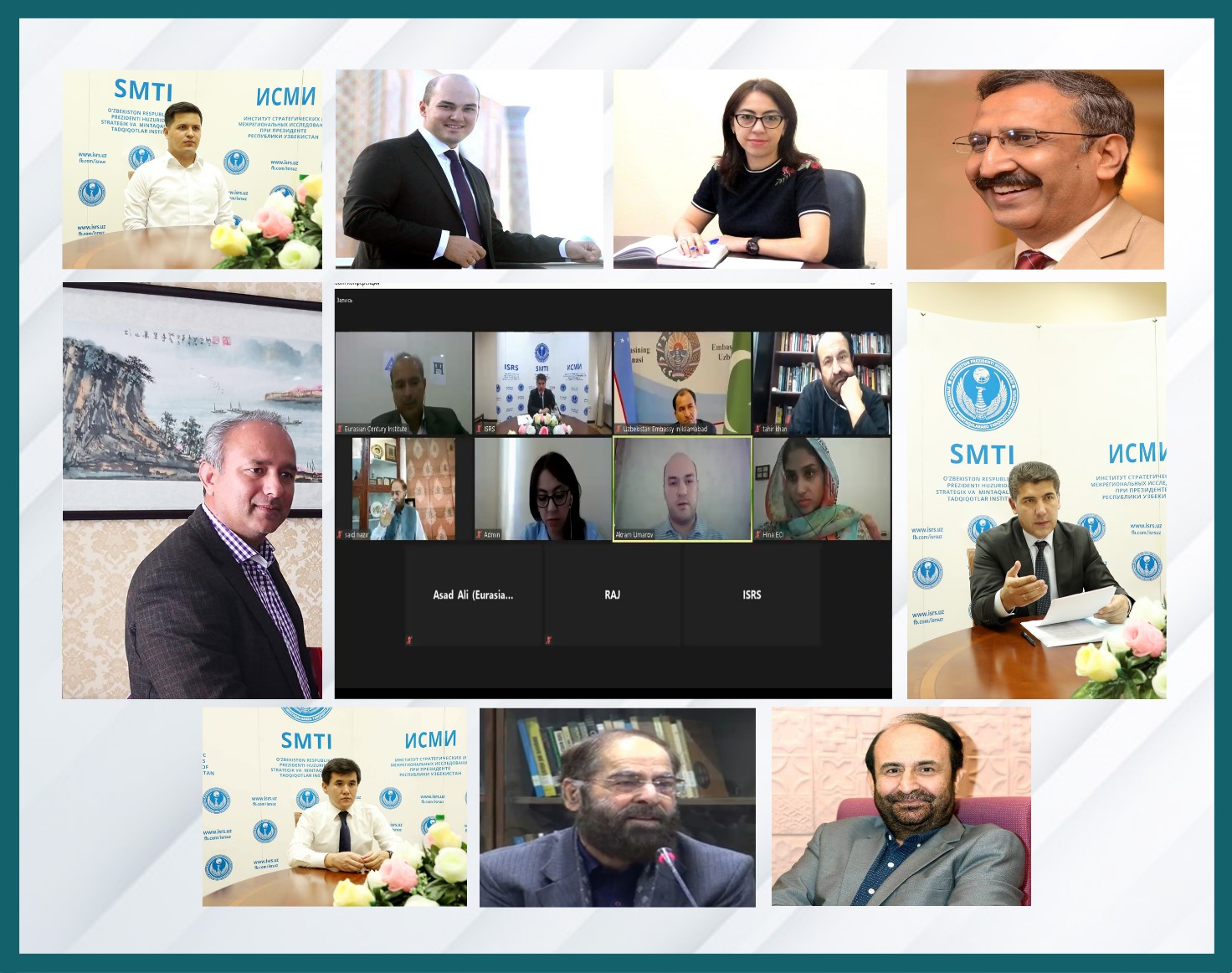 On 20 August 2020, an online conference was held on the topic: "Cooperation between Central and South Asia in the process of a peaceful settlement in Afghanistan."

The event, organized by the Institute for Strategic and Interregional Studies under the President of the Republic of Uzbekistan in cooperation with the Pakistani Institute of the Eurasian Century, was attended by the heads and leading experts of think tanks and research structures of the two countries.

The main topics of discussion were the role and efforts of the countries of Central and South Asia in the process of peaceful settlement and economic recovery of the Islamic Republic of Afghanistan (IRA), as well as the prospects for trans-regional cooperation.

Speaking at the event, First Deputy Director of the Institute for Strategic and Interregional Studies under the President of the Republic of Uzbekistan, Akramjon Nematov, noted that achieving long-term peace in Afghanistan is of strategic importance for the security and sustainable development of Central and South Asia, realizing in full the enormous potential of transregional cooperation.

In this regard, the countries of Central and South Asia, which are directly experiencing the negative consequences of the long-term conflict in Afghanistan, need to continue to provide consolidated support to the Afghan people in their quest for peace and prosperity.

At the same time, according to A. Nematov, further strengthening of the comprehensive and long-term Uzbek-Pakistani partnership can play an important role in the process of achieving sustainable peace in Afghanistan.

Peace in Afghanistan will create favorable conditions for the further sustainable development of the entire Eurasian space, will give a powerful positive impetus to the expansion and deepening of cooperation between Central and South Asia.

According to the expert, the high dynamics of mutually beneficial cooperation between Uzbekistan and Pakistan achieved in recent years testifies to the great potential of interregional interconnection. So, since 2016, mutual trade between the countries has grown 5 times, the number of tourists from Pakistan to Uzbekistan has increased 12 times, in just 2 years the number of enterprises in Uzbekistan with Pakistani capital has almost doubled - from 68 to 109 units, and transit Pakistani cargo by all modes of transport through the territory of Uzbekistan 5 times.

A. Nematov stressed that it is important to focus joint efforts on the implementation of infrastructure, socio-economic and transport-logistics projects in Afghanistan, which will contribute to long-term stability and sustainable development of this country, create interregional ties between Uzbekistan and Pakistan.

Among the key projects that could make a significant contribution to the restoration of the peaceful economy of Afghanistan, the construction of the Mazar-i-Sharif-Kabul-Peshawar railway, the Surkhan-Puli-Khumri power line, as well as the creation of joint ventures in the Termez free economic zones were identified and Boysun-Pharm, whose products can be supplied to Afghanistan and other countries of the near and far abroad.

Supporting the significant efforts of Uzbekistan to resolve the situation in Afghanistan, President of the Institute of the Eurasian Century Irfan Shahzad Takalvi emphasized that Pakistan highly appreciates the foreign policy initiatives of President Sh. Mirziyoyev to achieve long-term peace in Afghanistan.

In particular, according to the Pakistani expert, the Tashkent Conference on Afghanistan initiated by the President of Uzbekistan and the declaration adopted as a result opened a "new milestone" in the efforts of the international community to resolve the Afghan crisis, as well as paved the way for achieving current practical results in organizing inter-Afghan peace talks.

According to Irfan Takalvi, Pakistan and Uzbekistan are two countries that are making great efforts to completely end the war in Afghanistan and establish stable peace and stability. Peaceful and prosperous Afghanistan will pave the way for broad, comprehensive, multifaceted trans-regional cooperation, will act as a "continental bridge" between South and Central Asia. As soon as the world returns to Afghanistan, Irfan Takalvi stressed, the entire region will reap the benefits of expanding trade ties, people-to-people contacts, and capital inflows. As a result, the region will become a growth engine for both Asia and Eurasia.

The head of the department of the Information Analytical Center for International Relations M. Khusnitdinova drew the attention of the conference participants to the fact that the Uzbek side, despite the difficult epidemiological situation, stands for joint efforts of the countries of the region and Eurasia to maintain and develop regional trade and transport and logistics ties.

The border of Uzbekistan with Afghanistan this year remained open for all transport freight traffic. Thanks to this, the positive dynamics of mutual trade was preserved, as well as the range of critical goods supplied to Afghanistan was expanded. Thus, in the first half of 2020, the level of trade with Afghanistan increased by 24%, amounting to US$332.9 million. Railway transportation increased by 50.7%, reaching 2.20 million tons. This has become an important factor in maintaining the normal life of this neighboring country. The successful restoration of transit for Afghanistan by the Pakistani side allows one to count on the fact that Uzbekistan and Pakistan will be able to intensify the development of trade and transit of goods through Afghan territory.

This, as the expert noted, will contribute to building up our bilateral cooperation, more effective involvement of Afghanistan in regional trade and economic ties, enhancing broad economic interaction between the countries of Central and South Asia.

Speaking for a comprehensive deepening of cooperation between Uzbekistan and Pakistan, member of the Council of Consultants of the Center for Global and Strategic Studies of Pakistan Said Nazir Mokhmand indicated that the city of Termez can play an important role in strengthening interregional cooperation between Central and South Asia. The developed transport, logistics, trade and economic infrastructure of Termez, as well as its convenient geographical location, predetermined this city as a promising bridge between South and Central Asia. According to him, Termez has the potential to become a gateway to Afghanistan and South Asia not only for Uzbek entrepreneurs, but also businessmen from Tajikistan, Kazakhstan, Kyrgyzstan and Turkmenistan.

The importance of combining the efforts of Pakistan and Uzbekistan as "reliable and trusting partners" in promoting the peace process in Afghanistan was also emphasized by the well-known Pakistani journalist, BBC commentator Muhammad Tahir Khan. According to him, Islamabad and Tashkent share common goals to establish peace in Afghanistan, as well as to ensure economic development through mutual cooperation in the region. Pakistan and Uzbekistan are on the same page regarding the peace process in Afghanistan. Both Tashkent and Islamabad believe that there is no military solution to the Afghan conflict, and the process of inter-Afghan reconciliation should take place without external interference or pressure. At the same time, the great authority of these countries among many participants in the intra-Afghan dialogue is undeniable, says Muhammad Tahir Khan

In general, the experts agreed that the consolidation of the efforts of the international community and regional countries is a key factor in advancing the peace process in Afghanistan. At the same time, the comprehensive strengthening of the multifaceted Uzbek-Pakistani partnership can play an important role in the Afghan settlement. In this context, the conference participants also stressed the importance of uniting joint efforts in the implementation of projects that will contribute to long-term stability, sustainable development and prosperity of Afghanistan, turning this country into a "land bridge" between South and Central Asia.

The conference received a wide positive response in the leading Pakistani media. Commenting on the holding of the next Uzbek-Pakistani conference on the Afghan peace settlement, the leading Pakistani publication Islamabad Post notes that a positive regional approach and joint efforts to combat international terrorism are the best response to the remaining number of issues and obstacles to the advancement of the Afghan peace process.

At the same time, according to the observers of the Diplomatic News Agency, specific initiatives of Uzbekistan to strengthen road and rail links between Uzbekistan and the region, the promotion of energy supply projects, the provision of humanitarian assistance and assistance in the development of Afghanistan contribute not only to the socio-economic recovery of the neighboring country, but also to the development trans-regional cooperation.