"Round table" with representatives of the countries of "Visegrad Group"

The Institute for Strategic and Regional Studies under the President of the Republic of Uzbekistan held a round table with the Center for Central Asian Research of Budapest Corvinus University and ambassadors of the “Visegrad Group” countries (Hungary, Czech Republic, Slovakia and Poland) in Uzbekistan. During the discussions, participants assessed the large-scale reforms in the republic and current state and prospects for relations of Uzbekistan with Hungary, Czech Republic, Slovakia and Poland.

Hungarian side also introduced a joint report of analytical centers of Hungary, Czech Republic, Slovakia and Poland on the “Political and economic relations between the countries of the “Visegrad Group” and Central Asia after 1991”.

European partners emphasized that today Uzbekistan is going through a period of large-scale transformations, fundamentally changing the main directions of its foreign policy and conducting internal reforms, aimed at improving all spheres of the life in the country. By opening borders and improving relations with neighboring countries, Uzbekistan is forming an atmosphere of trust, mutual understanding and mutually beneficial cooperation in Central Asia.

The participants of the round table noted the disparity between the current scale of cooperation and the potential and opportunities that the parties have. In this context, special attention was paid to discussions on prospects for expanding cooperation, both on a bilateral basis and in the format of relations between the countries of Central Asia and the “Visegrad Group”.

In conclusion, the participants agreed that the countries of Central Asia and the “Visegrad Group” have sufficient potential to expand cooperation in such areas as trade, economics, agriculture, modern technologies, industry, science, education, culture and tourism. Two sides emphasized the importance of intensifying of dialogue between the foreign ministries and joint research activities of the think tanks of the parties in order to eliminate barriers to the development of multi-faceted and mutually beneficial cooperation of Uzbekistan with the “Visegrad Group”. 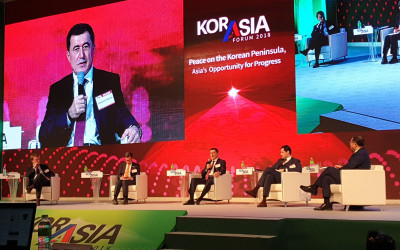 Speech of the director of ISRS Vladimir Norov at an international conference “Forum Korea-Asia 2018” dedicated to the topic “Peace on the Korean Peninsula: The Possibilities of Asia for development"