The President of Uzbekistan cordially congratulated the Leader of Russia on his birthday, sincerely wishing him good health, prosperity, great success, and peace and further prosperity to the friendly Russian people.

The historical role of President Vladimir Putin in the formation of modern Russia and his contribution to strengthening strategic partnership and alliance between Uzbekistan and Russia were noted.

Issues of further expansion of multifaceted cooperation between the two countries were considered.

The dynamic development of interaction in all areas was noted with satisfaction. The trade turnover and the scale of industrial cooperation are steadily growing, including new projects with the participation of leading enterprises and banks of Uzbekistan and Russia. The joint production of the Sputnik V vaccine was launched.

The first foreign branch of the Russian State University of Cinematography has been opened in Uzbekistan. Russian educational exhibition was held in Tashkent these days.

The Presidents discussed the preparation for the upcoming high-level state visit to the Russian Federation, to take place next month.

Views were also exchanged on the current issues of international politics and regional interaction, including in the context of the development of the situation in Afghanistan.

The telephone conversation between the leaders of the two countries took place in a traditionally warm, sincere and friendly atmosphere. 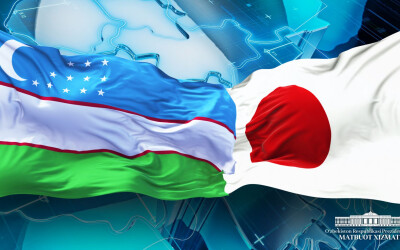 President of the Republic of Uzbekistan Shavkat Mirziyoyev congratulated the Leader of the Liberal Democratic Party of Japan Fumio Kishida on his election as Prime Minister of the country.