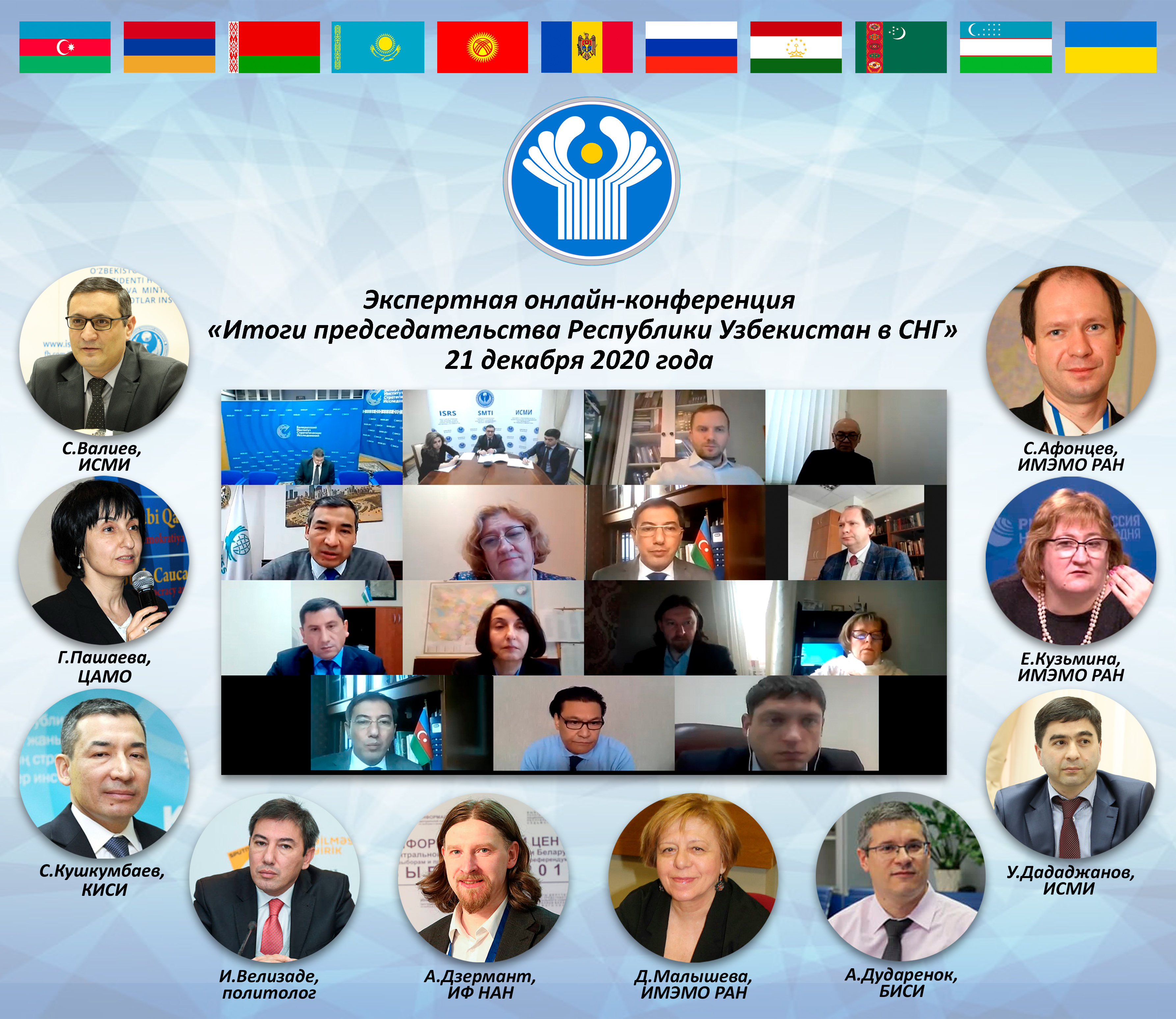 On December 21, an expert virtual conference was held to discuss the results of Uzbekistan’s chairmanship in the CIS.

The event, organized by the Institute for Strategic and Regional Studies under the President of the Republic of Uzbekistan, was attended by experts from leading research institutes of the CIS member states.

Views were exchanged on the results of Uzbekistan’s chairmanship in the Commonwealth of Independent States, the country’s contribution to the development and strengthening of multilateral cooperation within the framework of the organization. An assessment was given to the new initiatives of the President of Uzbekistan Shavkat Mirziyoyev to improve the interaction between the CIS member states in various spheres.

ISRS Deputy Director Sanjar Valiyev outlined the high performance of Uzbekistan’s chairmanship in the CIS in 2020, achieved despite the difficult period of the pandemic. The expert emphasized that at the beginning of the year Uzbekistan took persistent and consistent actions in developing measures and mechanisms aimed at maximizing the potential of the Commonwealth in the interests of development of all its participants and solving emerging problems. The main priority of Tashkent is the consistent expansion and enhancement of the effectiveness of multilateral cooperation.

As S. Valiyev emphasized, under the leadership of President Shavkat Mirziyoyev, Uzbekistan has stepped up its participation in the development of trade, economic, transport and communication spheres, in countering transnational challenges and threats, strengthening the cultural and humanitarian component of cooperation in the Commonwealth. This line became a direct reflection of the new open foreign policy and the adopted strategic directions of internal development.

The most important achievements of Uzbekistan’s chairmanship include the updated Concept for further development of the CIS up to 2030, which was fully supported and approved by the leaders of the participating states at the December summit, and a number of other important program documents. It was emphasized that Uzbekistan considers the CIS as an important and effective platform for strengthening partnership in all areas of political, economic and humanitarian cooperation. As S. Valiyev noted, the new, demanded initiatives forwarded by the leadership of Uzbekistan at the final summit of the heads of the CIS states on December 18 this year are intended to continue the intensification and expansion of all spheres of practical interaction.

Supporting his colleague, Deputy Director of IMEMO RAS Sergey Afontsev highlighted important basic trends that emerged during the presidency of Uzbekistan. In his opinion, during this period, documents have been prepared and adopted that are of great importance for further integration movement within the CIS. Among them is the new Strategy for Economic Development in the CIS until 2030, which by its content demonstrates a “colossal qualitative breakthrough”. This program document laid the foundations for the most priority areas of cooperation between the CIS member states, including in the technological sphere, which, due to balanced and practically realistic approaches, are of great interest for real business.

Deputy Director of the Center of Analysis of the International Relations of Azerbaijan, Gulshan Pashayeva, assessing the results of Uzbekistan’s chairmanship, noted that the country’s leadership has actually formed new approaches to cooperation within multilateral formats.

As the expert noted, with their help it is possible to develop not only bilateral, but also regional economic, cultural and humanitarian cooperation based on “sincere friendship and mutual interests”.

The expert emphasized that Uzbekistan authorities have demonstrated by their example that international and regional platforms can in fact be effective, especially when all the parties clearly understand the tasks and priorities that these organizations face.

Participants of the conference agreed that in the light of the “reset” of the CIS platform and the unifying factors of modern challenges, carried out at the initiative of Uzbekistan, the Organization will retain its relevance in the long term as an effective platform for multilateral interaction.
Source