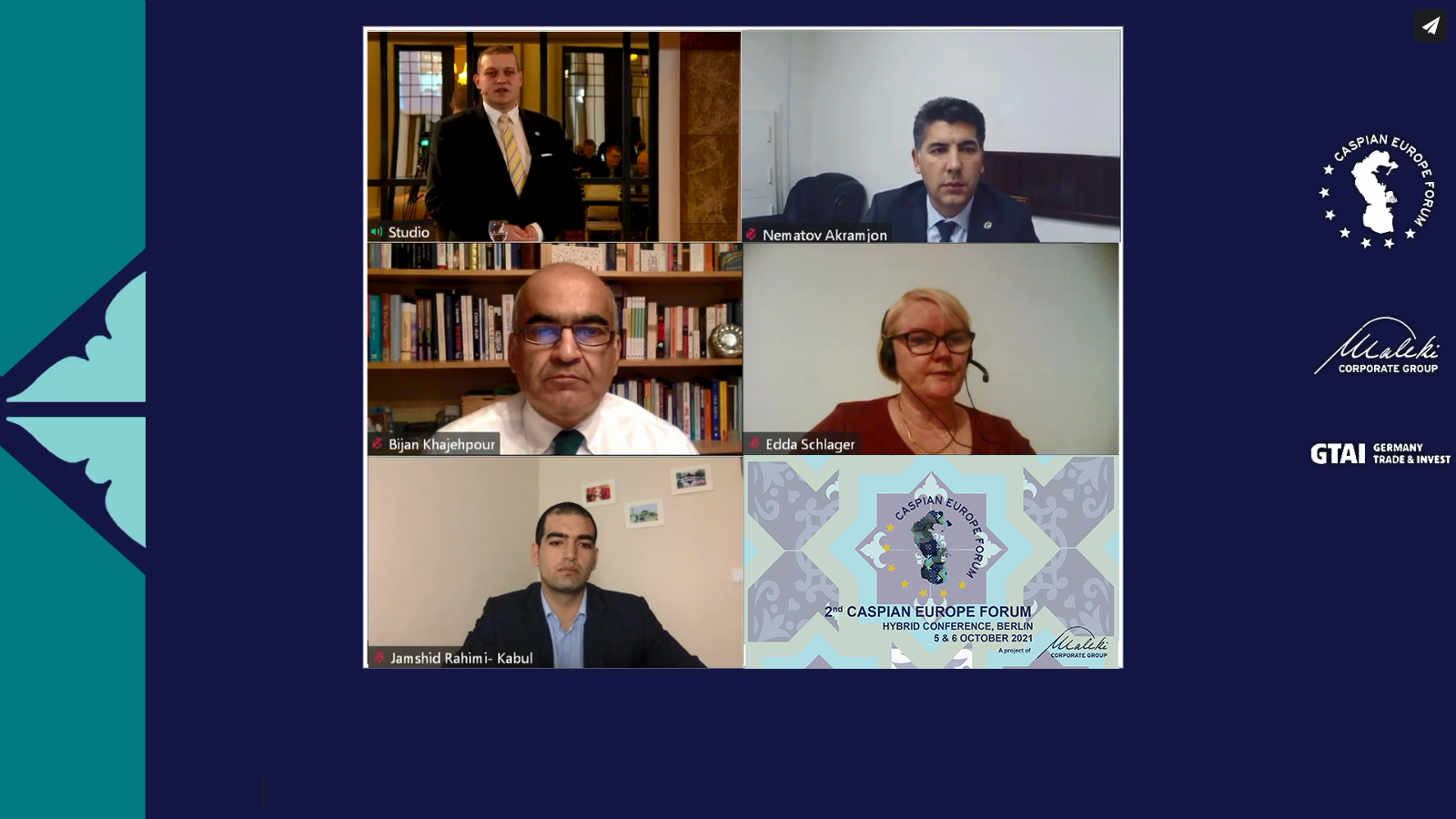 On 5-6 October, with the participation of representatives of government and business circles of the countries of Central Asia, the Caspian region and the European Union, the Second International Forum "Caspian-Europe" was held in an online format.

The aim of the conference is to promote the development of business relations between the EU, Central Asia and the Caspian region. As part of the event, a session was organized on the geopolitical and economic implications for the countries of the region in the context of current events in Afghanistan.

Speaking at the event, First Deputy Director of the ISMI A. Nematov outlined the main approaches of Uzbekistan to resolving the situation in Afghanistan.

It was especially emphasized that the establishment of peace in this country is one of the priorities of Uzbekistan's foreign policy. Afghanistan remains a key factor in ensuring stability and sustainable development in Central Asia.

It was noted that Uzbekistan has always advocated a political settlement of the conflict in a neighboring country, the restoration of its economy through the implementation of social, economic and infrastructure projects, as an important condition for achieving lasting peace in Afghanistan.

According to A. Nematov, the coming to power of the Taliban movement in Afghanistan is an objective reality. Uzbekistan, as the closest neighbor, is engaged in a dialogue with the new Afghan authorities, advocates for the formation of an inclusive government, full consideration of fundamental human rights and freedoms, including women and national minorities, as well as preventing the use of the country's territory for subversive actions against neighboring states.

At the same time, the expert emphasized that in the current difficult period, the isolation of Afghanistan should not be allowed, and it should not be left alone with the existing big problems. A protracted humanitarian and socio-economic crisis, as well as the difficult process of forming a capable government, can create a security vacuum in Afghanistan. This, in turn, will aggravate the already deplorable situation of the Afghan people, may contribute to the activation of terrorist and extremist groups, and increase the risks of transferring their actions to neighboring countries.

According to the first deputy head of the ISMI, it is necessary to avoid repeating the scenario of the 1990s in Afghanistan, when the country was engulfed in a civil war and a humanitarian crisis, and its territory turned into a "hub" of international terrorism and drug production.

In this regard, the international community should consolidate efforts to establish a lasting peace in Afghanistan, its post-conflict reconstruction and the country's integration into regional and world economic ties.

Supporting the point of view of A. Nematov, Afghan expert Jamshid Rahimi noted that Afghanistan will not be able to overcome the current "economic shock" alone.

According to him, the country's economy has been seriously affected by the crisis caused by the COVID-19 pandemic, disruptions in export-import operations and bank closures amid recent political-military events.

“In these conditions, Afghanistan will be able to restore its economy only with the support of the international community,” the Afghan representative stated.

In turn, the correspondent of the German newspaper "Berliner" Edda Schlager believes that the Central Asian region makes a huge contribution to the restoration of the Afghan economy. At the same time, recent events in this country have become evidence of the strategic foresight of the policy of the President of the Republic of Uzbekistan Shavkat Mirziyev to strengthen good-neighborly relations in Central Asia. Thanks to the efforts of Uzbekistan in recent years, the countries of the region have become cohesive and consolidated in the face of common challenges and threats.

In this context, which is especially noteworthy, says E. Schlager, "the head of Uzbekistan as the" Leader-initiator "played an important role not only in strengthening economic ties in the region, but also initiated the restoration of historical interconnection between Central and South Asia." In the short term, this will allow Afghanistan to become an active participant in transregional trade and economic ties, take advantage of the opportunity to develop its own economy, and turn into a peaceful country free from war, terrorism and drug trafficking.

The Caspian-European Forum has been held since 2020 with the participation of representatives of government and business circles of the countries of Central Asia, the Caspian region and the European Union. The 2nd Forum was attended by ministers and entrepreneurs, as well as leading international experts from more than 10 countries and 30 international organizations and companies, including ADB, CAREC, Schneider Group (Germany), etc.

Within the framework of the event, issues of development of logistics, infrastructure, energy, digital economy, investments between the EU, the countries of Central Asia and the Caspian region were discussed.