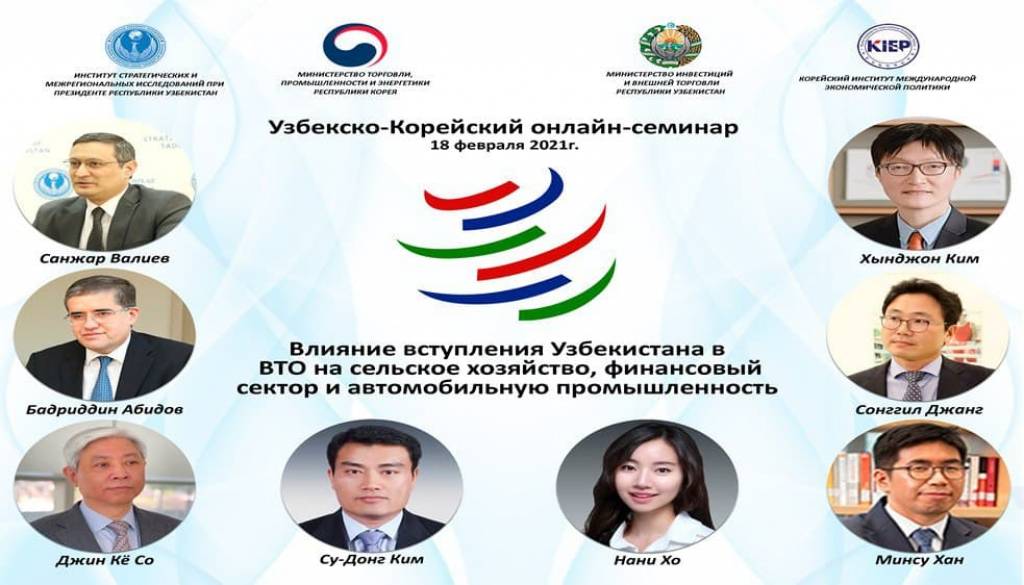 On 18 February, another Uzbek-Korean webinar was held on the theme "Impact of Uzbekistan’s accession to the WTO on agriculture, the financial sector and the automotive industry."

The webinar was attended by more than 50 senior officials and specialists of different levels of 23 ministries and departments responsible for trade, industry, finance, law, as well as representatives of expert and analytical institutions of Uzbekistan and the Republic of Korea.

The online meeting made it possible to study the results of research by experts on the preparation of Uzbekistan for membership in the WTO and discuss the impact of this process on some priority sectors of the national economy.

It was noted that the friendly and comprehensive support of the South Korean side, rendered to the process of fundamental transformations and reforms carried out under the leadership of Shavkat Mirziyoyev, makes a significant contribution to the economic development of the country. At the same time, the assistance provided by Seoul contributes to obtaining the most favorable conditions for Uzbekistan’s membership in the WTO and its full-scale integration into the world economy.

In this context, President of the Korean Institute for International Economic Policy Kim Heungjong noted that Tashkent’s efforts to resume the process of joining the WTO in 2020 accelerate the process of trade liberalization and strengthen the country’s foreign economic activity. At the same time, the South Korean specialist expressed his firm conviction that the active multidimensional interaction carried out in recent years between the specialized departments of the two countries will contribute to the preparation of the Uzbek economy for a highly competitive environment in world markets.

In turn, Deputy Minister of Investments and Foreign Trade of the Republic of Uzbekistan Badriddin Abidov assured that the accession of Uzbekistan to the WTO is an unconditional priority of the country. This step will allow modernizing the entire set of trade and political tools based on the principles and rules of the WTO agreements.

Ultimately, an increase in the inflow of foreign direct investment is expected, as well as the introduction of world best practices in the process of economic development of Uzbekistan.

As a result, the strategic tasks of ensuring the well-being of the population and creating new jobs will be effectively solved. In this regard, the rich experience of the Republic of Korea’s participation in the world trade system is of particular value for Uzbekistan, and joint scientific research will help develop effective measures to mitigate possible negative consequences on the country’s economy.

In this context, the head of the research project, Seo Jin Kyo, presented a final report on the implications of Uzbekistan’s entry into the WTO for agriculture. He proposed to protect the positions of this industry as much as possible, taking into account the high employment of the population in agriculture.

According to him, the creation of a favorable agribusiness climate and value chains, a decrease in the role of the state in regulation and measures to increase the investment attractiveness of agriculture will turn the industry into a "driver" of development. In the process of joining the WTO, the main goals of the agroindustry should be the issues of ensuring food security and access of the population to quality food.

Continuing this topic, a researcher at the Korea Institute for International Economic Policy Su-Dong Kim noted that Uzbekistan has a number of advantages, including a high population and government support. This creates the basis for industrial development. He added that the likelihood of success from accession to the WTO will be high if the country expands its exports of food or agricultural raw materials both to the CIS countries and to Europe and Asia. For this, Uzbekistan needs to improve not only price competitiveness, but also the quality of products.

In turn, the expert of the Korean Institute of International Economic Policy Minsu Khan, highly appreciating the economic achievements of Uzbekistan over the past 4 years, noted that the introduction of preferential measures to liberalize foreign exchange, such as the unification of exchange rates and the easing of rules on foreign exchange transfers, are receiving positive feedback. from foreign investors.

The specialist drew attention to the positive factors associated with the opening of the financial market of Uzbekistan after joining the WTO. This process assumes an increase in total capital by 55.3%, and the number of jobs - by 1.7%, which is associated with the expectation of an increase in the inflow of foreign capital. This will have a positive effect on the competitiveness of banking structures, since only profitable companies with effective management will survive in the new conditions.

Nani Ho, a specialist at the Lee & Ko law firm, emphasized that the active involvement of Uzbekistan in world trade will have a positive effect on the development of transport and logistics infrastructure and help Uzbekistan enter new markets. Touching upon the topic of Uzbekistan’s accession to the WTO and interaction with the EAEU, she expressed an opinion on the advisability of expanding the general foreign trade regime to further focus on regional integration processes. Considering the need to harmonize negotiations with partners on tariff policy, obtaining observer status with the EAEU is the best step.

At the end of the webinar, the participants agreed that the findings of the study were extremely useful for further negotiations on Uzbekistan’s accession to the WTO and preparing a number of industries for the transition period. In this regard, the experts of the two countries agreed to continue their joint work, taking into account the observed changes in the global economy and world trade.