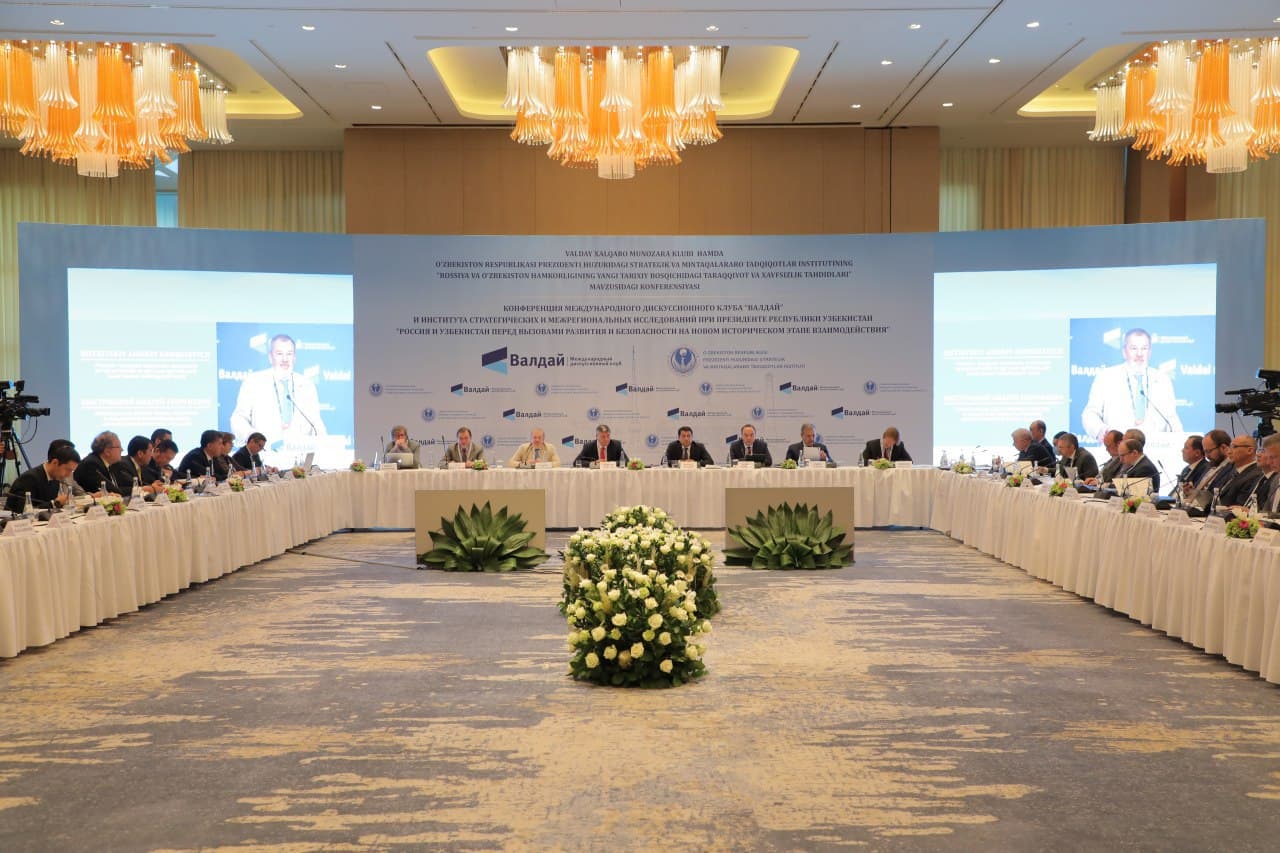 The conference "Russia and Uzbekistan facing the development and security challenges at a new historical stage of interaction" started in Tashkent today. The Forum is organized by the Institute of Strategic and Regional Studies under the President of the Republic of Uzbekistan and the International Discussion Club "Valdai".

The Forum is a logical continuation of the dialogue of Uzbek and Russian experts under the auspices of ISRS and the Valdai International Discussion Club, launched in 2019 in Samarkand within the framework of the X Asian Conference on the theme "Central Asia and Eurasia: multilateral cooperation in the face of the challenges of the global disorder" and the special session "Russia - Uzbekistan: prospects for bilateral cooperation in the context of the new world order".

Leading international experts in bilateral relations, reputable experts in political science, economy, security of IDC "Valdai", and journalists of the largest Russian media gathered in the capital of Uzbekistan to participate in the conference.

During the three thematic sessions, conference participants will

– exchange views on the state and prospects of Uzbek-Russian cooperation in the spheres of politics, economy, security, cultural and humanitarian cooperation;

– get acquainted with the reforms in Uzbekistan, discuss their impact on the sustainable development of Central Asia, assess possible risks and threats to regional stability and security, outline areas of mutually beneficial cooperation in these areas;

– consider the development of international trade and integration in Central Eurasia, and develop expert visions of perspective growth points and drivers of the development of Uzbek-Russian relations of strategic partnership and alliance.

Such experts as Special Representative of the President of Uzbekistan for Afghanistan Ismatilla Irgashev, Director ISRS Eldor Aripov, Director of the International Institute of Central Asia Anwar Nasyrov, Deputy of the Legislative Chamber of the Oliy Majlis Nodir Jumayev, Director of the Institute for Forecasting and Macroeconomic Research Umid Abidhajayev and others will speak from the Uzbek side.

The Russian side is represented by Chairman of the Board of the IDC "Valdai" Development and Support Fund Andrey Bystritsky, Director for Scientific Work of the "Valdai" Fund, Chairman of the Presidium of the Council for Foreign and Defence Policy, author and host of the "International Review" program Fedor Lukyanov, Program Director of the "Valdai" Club Timofey Bordachev, Director of the Centre for Eurasian Studies of the Institute of International Studies of the MGIMO of the Ministry of Foreign Affairs of Russia Ivan Safranchuk, Deputy Director of the Centre for Integrated European and International Studies of NRU HSE Vasily Kashin and others.

The holding of the next Uzbek-Russian conference on a high level is due to the increased interest in Uzbekistan among the experts. The country occupies a special place in the Central Asian region, with the largest population, a strong export-oriented production capacity and impressive military forces. In recent years, political and diplomatic ties between Uzbekistan and Russia have gained the trustworthy character of alliance and strategic partnership. In the first half of 2021, the trade volume between our countries has already amounted to 3.7 billion dollars, showing an increase of 30% compared to the same period last year. The number of enterprises with Russian capital has increased from 915 to almost 2.2 thousand over the past three years in Uzbekistan. In the first half of 2021 alone, 240 enterprises with Russian capital were launched. The program of economic cooperation for 2019-2024 and more than 800 trade and investment agreements and memoranda worth 25 billion dollars are actively implemented.

Within the framework of the conference, the Valdai Club will present a new report entitled "The Iron Framework of Eurasia: Achievements, Problems and Prospects of Continental Cohesion", prepared by a group of reputable experts of IDC "Valdai" and the Higher School of Economics of the Russian Federation with the assistance of ISRS.

The report is devoted to the development of the transport and logistics system of Eurasia based on railway communication as an important condition for the expansion of land trade between Asia, Central Asia, Russia and Europe. It is noted that the railway network will be the most important factor in the connectivity of Greater Eurasia and its resistance to global challenges. At the same time, Central Asia will play the role of a bridge between East and West, become a transit hub for new corridors, and become a dynamically developing region.

The report reflects such initiatives of Uzbekistan to unlock the transport and communication potential of the country and the region, as well as to improve regional connectivity, as the construction of railway Mazari Sharif – Kabul – Peshawar and China – Kyrgyzstan – Uzbekistan.

At the end of 2021, the club "Valdai" plans to release a new report on the Russian policy towards the post-Soviet space over the past 30 years. The conference in Tashkent will serve as one of the most important intellectual sources for completing this work.

The program of the visit of Russian experts provides acquaintance with the activities of the Technopark and IT school in Tashkent and a visit to the Victory Park, cultural, historical and architectural sites of the capital.