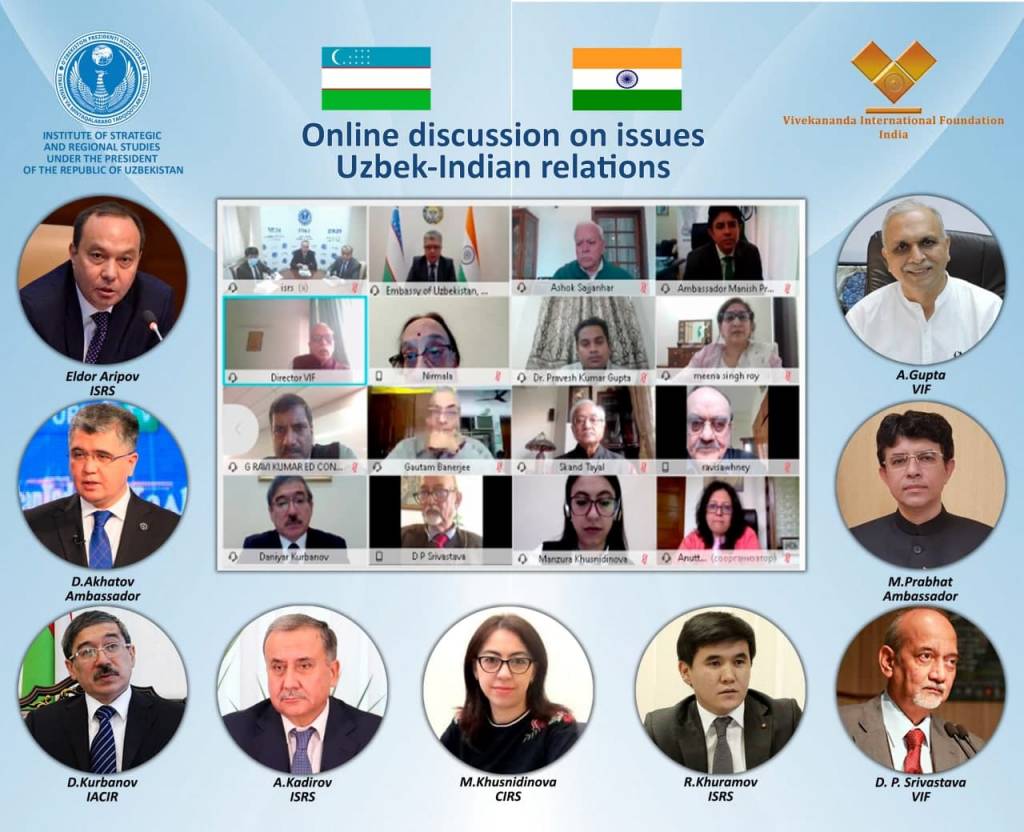 On 4 December 2020, with the support of the Embassy of Uzbekistan in India, an online conference was held on the topic "Current state and prospects for the development of Uzbek-Indian relations."

The event was organized by the leading think tanks of the two countries - "Vivekananda Foundation" and the Institute for Strategic and Interregional Studies under the President of the Republic of Uzbekistan (ISMI).

The conference brought together a representative composition of participants from among diplomats, prominent scholars and researchers in the field of international politics. During the virtual meeting, a thorough exchange of views took place on promising areas of cooperation between Uzbekistan and India, as well as the role of the two countries in the ongoing positive changes in Central Asia. Possible ways of expanding Uzbek-Indian interaction, promoting the peace process in Afghanistan and implementing various joint projects were discussed.

Opening the event, the Director of ISMI Eldor Aripov highly appreciated the level of Uzbek-Indian relations achieved in recent years, based on the principles of mutual respect and consideration of the interests of both countries. He especially emphasized the role of the President of the Republic of Uzbekistan Shavkat Mirziyoyev and the Prime Minister of India N. Modi in the dynamic development of multifaceted cooperation. According to the director of the ISMI, this is manifested in the very nature of relations between the leaders of the two countries and the intensity of their working contacts.

Aripov focused on the new opportunities opening up for deepening Uzbek-Indian relations in connection with the implementation of the development strategy of a new Uzbekistan, within which a set of measures is being taken to improve the business climate to attract foreign investment, develop an export-oriented economy and strengthen democratic institutions.

The Indian side also expressed its interest in giving a new dynamic to the Uzbek-Indian relations. In particular, the director of the Vivekananda Foundation, Arvin Gupta, noted the need to strengthen cooperation between countries in the fight against the pandemic and its socio-economic consequences.

In this vein, he informed the Uzbek side of the plans of the Indian government to establish the mass production of various vaccines against coronavirus in the country, offering cooperation in this area. He highly appreciated the initiative of the head of Uzbekistan, put forward during the last SCO summit, to develop cooperation in the field of telemedicine, which has become a significant contribution to the consolidation of the efforts of the countries of the organization to combat the pandemic in the SCO space.

A. Gupta also outlined such areas as digital technologies, medicine, education and tourism as promising areas of cooperation, expressing the readiness of the Indian side to share best practices in the development of innovative technologies and start-up ecosystems in Uzbekistan.

According to the expert, the strengthening of cooperation in this area clearly fits into the desire of Uzbekistan to develop information technologies in the country within the framework of the program developed at the initiative of President Sh.M. Mirziyoyev to train "a million domestic programmers" by 2025.

Ambassador of Uzbekistan to India Dilshod Akhatov also shared his vision of the state of bilateral relations, who noted that in the past 2-3 years, Uzbekistan and India have increased cooperation in practical terms. The countries also find complete mutual understanding on most international and regional problems, including the issues of settlement in Afghanistan. They are fruitfully cooperating within the framework of the UN and the SCO, in the India-Central Asia format.

A positive trend in the Uzbek-Indian cooperation is the development of interaction at the regional level of the two countries. The signing of a Memorandum of Understanding between the Andijan region and the state of Gujarat made it possible to expand direct trade and economic ties between them. There are plans to expand this practice by forging partnerships between other regions of India and Uzbekistan, in particular the Fergana region and the state of Haryana.

Further expansion of cooperation with India in training specialists through the Indian Technical and Economic Cooperation Program (ITEC) and the Indian Council for Cultural Relations (ICCR) is important. The ambassador expressed interest in attracting Indian advanced innovative and IT technologies for the development of knowledge-intensive industries, as well as education and healthcare.

It is planned to increase cooperation in the spheres of culture and tourism, since Uzbekistan and India, being the most ancient centers of world civilization, have enormous cultural and tourist potential.

Indian Ambassador to the Republic of Uzbekistan Manish Prabhat also pointed out the demand for the use of the unused potential of cooperation. The diplomat emphasized that ample opportunities for deepening India’s ties with Uzbekistan and in general with the Central Asian region appeared due to the new dynamics of relations between Central Asian states that have developed in recent years.

He assessed such positive changes outlined in the region as a result of the renewed regional policy of Uzbekistan and the personal efforts of President Shavkat Mirziyoyev, who, according to the ambassador, managed to radically change the political climate in Central Asia.

In his opinion, the internal policy of Tashkent also demonstrates significant achievements. The Indian ambassador described the successes of Uzbekistan in recent years in the field of human rights and ensuring the openness of the country’s economy as breakthrough.

At the same time, Indian and Uzbek experts agreed that the main factor holding back the development of Uzbek-Indian cooperation is the absence of a direct transport and logistics route.

With this in mind, Distinguished Research Fellow of the Vivekananda Foundation D.P. Srivastava made a special emphasis on the need to strengthen the interconnection of the economies of the two countries by accelerating the process of connecting transport and logistics hubs between the regions of Central Asia and South Asia, including by speeding up the implementation of the North-South international transport corridor.

In this regard, he considers the initiative put forward by the President of Uzbekistan at the 75th session of the UN General Assembly to create a Regional Center for the Development of Transport and Communication Interconnection, put forward at the regional level. The implementation of this initiative, according to the expert, will reveal the transit potential of the region and will serve as an additional tool for the development of transport and communication cooperation between the regions of Central and South Asia.

Another priority area of cooperation, the Indian side considers the consolidation of efforts to promote the economic reconstruction of Afghanistan. The need for joint measures is due to the deep involvement of Tashkent and New Delhi in promoting the peace process in the Afghan arena, as well as the presence of trusting and strong ties with official Kabul on both sides.

According to him, in a short period of time, Uzbekistan managed to consolidate its role as a regional player capable of exerting a stabilizing effect on the processes in Afghanistan. In turn, India is traditionally among the main donor countries of Kabul with investments of $ 3 billion.

The deputy director of ISMI Sanjar Valiev also dwelled on this topic. He invited the Indian side to consider the issue of active involvement of India in socio-economic, educational and energy projects implemented by Uzbekistan in the Afghan direction. Among them, according to the expert, is the implementation of joint projects based on the developing infrastructure in the border Surkhandarya region.

The possibility of holding a trilateral expert conference with the participation of representatives of Uzbekistan, India and Afghanistan was also discussed. The organization of such an event will make it possible to develop common approaches and recommendations for further socio-economic projects aimed at restoring the peaceful economy of Afghanistan.

At the same time, the head of the ISMI department, Alisher Kadyrov, drew attention to the demand for joint actions to overcome the negative consequences of the coronavirus pandemic, including threats to food security. In this direction, he called to intensify the work on signing the Agreement on Preferential Trade and the Agreement on the Promotion and Protection of Investments, as well as to work out the issue of eliminating various kinds of restrictions in mutual trade.

In general, the experts agreed that at the present stage, Uzbekistan and India need to develop a new paradigm of relations by launching additional strategic projects, provided with high-quality investment. Such development of the Uzbek-Indian partnership will become a solid foundation for long-term interaction of Central and South Asia with the integration of Afghanistan into the system of regional interconnection.