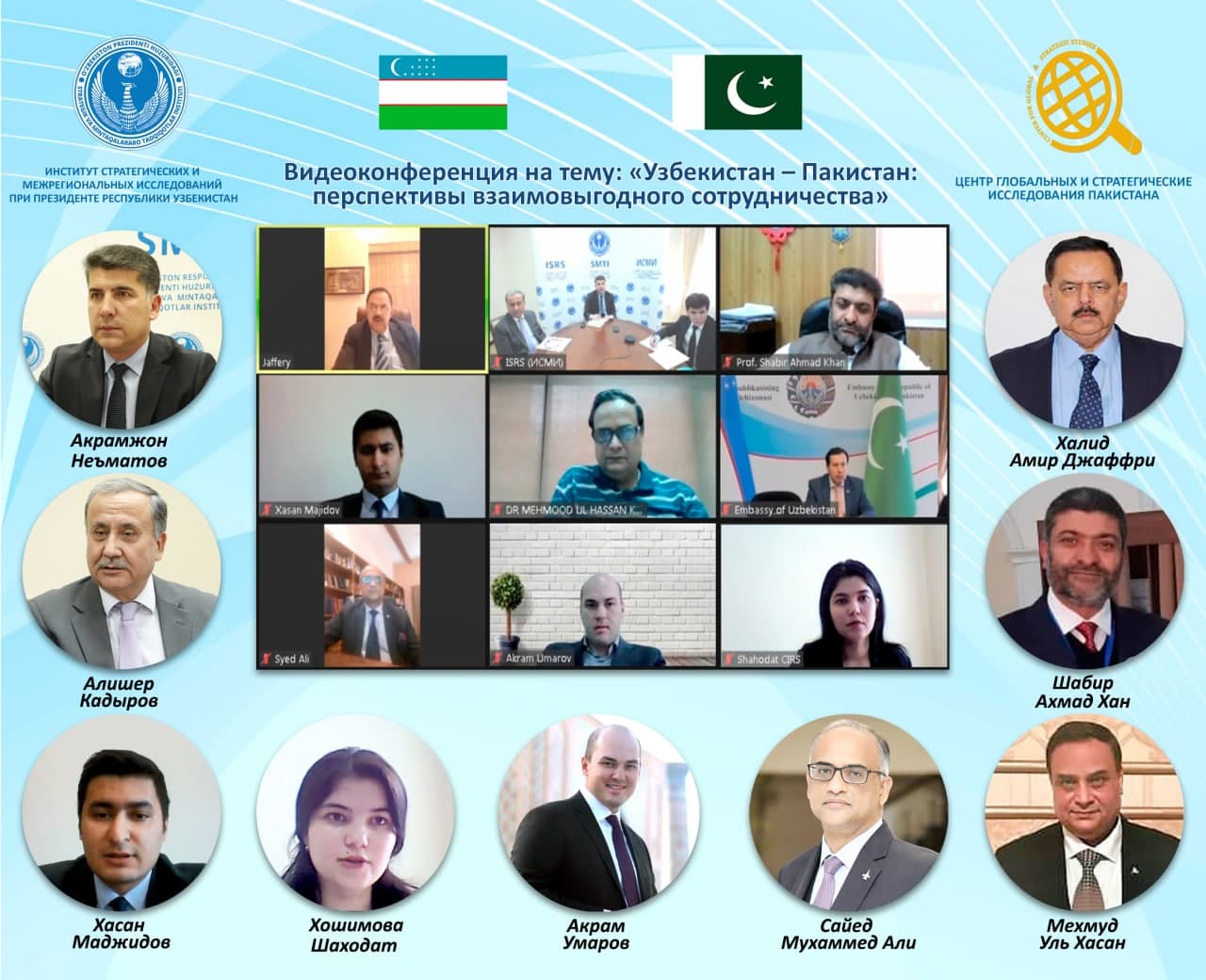 On 15 April, a video conference was held between the leading analytical structures of Uzbekistan and Pakistan on the topic: "Uzbekistan - Pakistan: prospects for mutually beneficial cooperation."

The event, organized by the Institute for Strategic and Interregional Studies under the President of the Republic of Uzbekistan (ISMI) together with the Center for Global and Strategic Studies of Pakistan, was attended by prominent scientists and experts from leading research institutes and think tanks of the two countries.

During the online dialogue, the state and prospects of bilateral relations between Uzbekistan and Pakistan were discussed against the background of strengthening interconnection between the regions of Central and South Asia.

Opening the online webinar, Akromjon Nematov, First Deputy Director of the Institute for Strategic and Interregional Studies under the President of the Republic of Uzbekistan, emphasized the importance of the event taking place immediately after the completion of an important bilateral summit at the highest level - President of the Republic of Uzbekistan Shavkat Mirziyoyev and Prime Minister of Pakistan Imran Khan. This meeting, he said, defined a new starting point in Uzbek-Pakistani relations, traditionally based on the principles of high mutual understanding, deep respect and sincere friendship.

It was especially emphasized that the statements made by the heads of state expressed a firm intention to construct a sustainable model of mutually beneficial ties, implying the full use of the existing potential of cooperation.

The representative of the ISMI noted with satisfaction that today Tashkent and Islamabad actually took a course towards reanimating historical ties. At the same time, relations between the two countries, which have reached the level of strategic partnership, have a huge potential for significant growth in trade, tourism, transport and industrial cooperation.

A powerful impetus to achieving these goals, according to the President of the Center for Strategic and Global Studies of Pakistan, Khalid Amir Jaffrey, will undoubtedly be given by the summit held on April 14 between the leaders of the two countries. The heads of state identified specific steps to further develop a multifaceted partnership.

At the same time, the expert emphasized that since 2016, the trade turnover between Uzbekistan and Pakistan has quadrupled, but the countries have a huge untapped potential for further increasing the volume of mutual trade. For example, significant prospects are opening up in the transport and communications sector. In particular, the implementation of the Trans-Afghan railway will radically increase the transit potential of Central Asia and revive the historical role of the region as a bridge connecting Europe and Asia with the shortest land route.

Its launch, according to Shabir Ahmad Khan, director of the Center for Central Asian Studies at Peshawar University, will certainly become an important milestone in the revival of the historical interconnectedness of the cities of Termez and Peshawar, which, once the capitals of the ancient Kushan kingdom, flourished in the era of the ancient Silk Road.

Also, according to the expert, such areas as agriculture (gardening, cotton processing) and pharmaceuticals can become promising areas for increasing interaction.

Dr. Mahmoud ul-Hasan Khan, an international expert and member of the Council of Experts of the Center for Global and Strategic Studies of Islamabad, believes that a deeply thought-out foreign policy of Uzbekistan contributes to the rapprochement and strengthening of mutually beneficial relations with all countries of Central and South Asia. Thus, the volume of interregional trade between the countries of Central and South Asia is growing by an average of 50% annually.

At the same time, according to the expert, the "economic diplomacy" of the head of Uzbekistan deserves special attention, as a result of which, in the period from 2017 to 2020, more than 300 agreements were signed between Uzbekistan and the countries of the region.

Complementing the views of his colleagues on the importance of building a trans-Afghan corridor, Pakistani expert on Central and South Asian studies, Dr. Syed Mohammed Ali, pointed out that "this jointly promoted project is a brilliant idea for restoring regional connectivity." According to him, this highway can become a link between the One Belt and One Road, and Chinese-Pakistani economic corridor projects, which will make it possible to realize the enormous economic potential of the countries of South and Central Asia. “Uzbekistan, in turn, will become a central trading hub in the movement of Asian goods to European countries and back,” the expert emphasized.

Highly assessing the peace diplomacy of Uzbekistan and Pakistan towards Afghanistan and their role in the settlement process, the Pakistani specialist noted the importance of joint efforts to provide widespread support for an early political resolution of the Afghan conflict. “Peace and security in Afghanistan will allow the countries of Central and South Asia to reap great economic benefits and take advantage of opportunities that have not yet been tapped,” he concluded.

In turn, Shakhodat Khoshimova, a leading researcher at the Information and Analytical Center for International Relations, expressed her conviction that deep historical and common cultural roots in relations between Pakistan and Uzbekistan serve as a solid foundation for the development of cultural and humanitarian ties between the two countries.

According to her, Tashkent and Islamabad have prerequisites for building up cooperation in this direction. So, today the Tourism Center of Uzbekistan is successfully operating in Islamabad, and in 2020 one of the leaders of the Naqshbandiya movement in the IRP H. Rahman was appointed Ambassador of Ziyorat Tourism of Uzbekistan to Pakistan. There is also a consistent increase in the interest of Pakistani youth in getting an education in Uzbekistan. If in 2019 the number of Pakistani students studying in higher educational institutions of Uzbekistan was 27, then by the end of 2020 their number reached 232.

In conclusion, the videoconference participants agreed on the need for a regular exchange of views between the analytical structures of the two countries to develop new promising areas of mutually beneficial cooperation.