Cooperation between Uzbekistan and Germany develops along an ascending trajectory 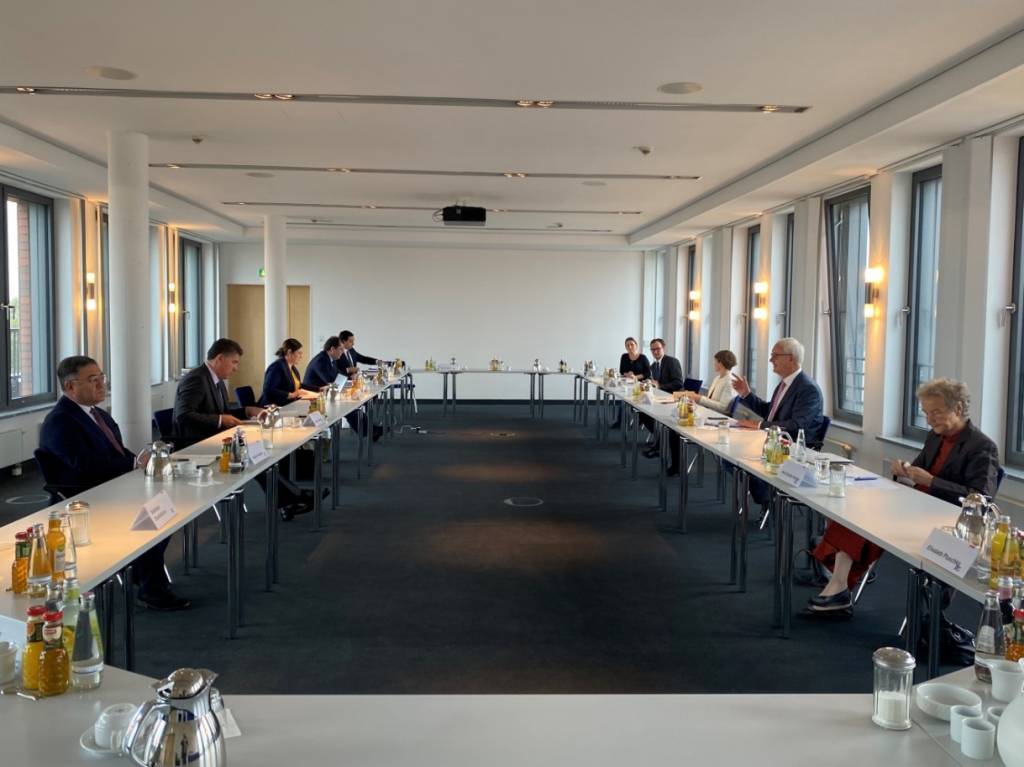 On September 28, Uzbekistan delegation consisting of representatives of the ISRS under the President of the Republic of Uzbekistan, the Development Strategy Center, IICA and NCHR met with representatives of the Friedrich Ebert Foundation, the German Institute for International and Security Affairs and the Advisor to the Federal President of Germany on Diplomatic and Foreign Policy Issues.

The meetings were organized with the assistance of the Embassy of the Republic of Uzbekistan in Berlin and the Konrad Adenauer Foundation.

The parties exchanged views on enhancing interaction in the political, economic, cultural and humanitarian spheres, in the field of security, strengthening parliamentarism and inter-parliamentary dialogue, as well as on the prospects for the development of the situation in Afghanistan.

Partners from Germany were informed about the positive transformations in the socio-political and socio-economic life of Uzbekistan.

Key reforms in the spheres of education, environmental protection, protection of human rights, ensuring the rule of law and the economy, including measures for the transition to a green and digital economy were considered. The main attention was paid to the proactive foreign policy of Uzbekistan, aimed at participation in global and regional processes.

Active discussions testify to the great interest of the expert and socio-political circles of Germany in the results of the reforms in Uzbekistan. In this context, Berlin notes that the changes taking place in Uzbekistan contribute to the formation of a positive image of the country, strengthening its role in the international arena.

The Head of the International Dialogue Department of the Friedrich Ebert Foundation (Friedrich-Ebert-Stiftung) Michael Meier, said that Germany considers Uzbekistan as a reliable and time-tested partner. According to him, Berlin is interested in deepening mutually beneficial and fruitful cooperation with Tashkent.

This is especially facilitated by the balanced and deeply thought-out foreign policy of Uzbekistan, which makes a significant contribution to ensuring sustainable development and stability in Central Asia.

A roundtable discussion was held at the German Institute for International and Security Affairs on “The Impact of the Afghan crisis on regional and security policy: a view from Uzbekistan”. The participants discussed the efforts of Uzbekistan for a political settlement of the situation in Afghanistan and the position of the Central Asian countries on key issues of the regional and international agenda.

According to German experts, the pragmatic and constructive foreign policy pursued by Uzbekistan significantly strengthens the country’s authority in the international arena and is an important factor in the political settlement of the situation in Afghanistan.

Thanks to the intensified cooperation of Uzbekistan with neighboring countries, there are positive trends in the region, which make it possible to position Central Asia as a stable, sustainable and prosperous region.

Regarding the situation in Afghanistan, it was noted that Tashkent’s policy in the Afghan direction is based on deep analysis and strategic vision. Uzbekistan plays an extremely important role in building a single regional line on the Afghan issue and has an increased potential to help stabilize the situation in the neighboring country.

At the meeting with Thomas Bagger, Diplomatic Adviser at Federal President’s Office, it was especially noted that today cooperation between Uzbekistan and Germany is developing along an ascending trajectory.

Thomas Bagger stated that Germany is watching with great interest the reforms in Uzbekistan, which find the support of the country’s population and instill confidence in the people of the future. The main reason for this widespread approval is that the reforms are meeting the expectations of citizens. In this vein, he noted that the experience of Uzbekistan is of great interest for study and dissemination in the reforming countries.

Discussing the policy in the Afghan direction, the Diplomatic Adviser at Federal President’s Office stated that Germany’s positions coincide with the approach of Uzbekistan, in particular, 1) the formation of a representative government in the country; 2) ensuring the rights of women and ethnic minorities; 3) continued assistance in overcoming the humanitarian crisis, restoring the peaceful economy of Afghanistan; 4) prevention of threats from Afghan territory against other countries.

In the coming days, Uzbekistan delegation will continue meetings with German political circles.