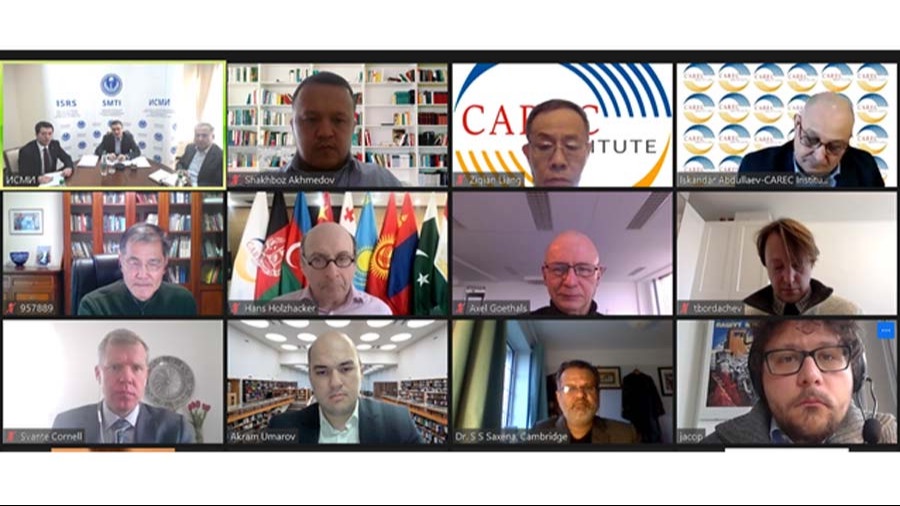 A virtual conference has been held on prospects for building connectivity between Central and South Asia, organized by ISRS and the International Institute for Central Asia Regional Economic Cooperation (CAREC).

The event was attended by prominent experts from leading international think tanks such as Chatham House (UK), German Institute for International and Security Affairs, Valdai Discussion Club (Russia), Center for Russian and Central Asian Studies at Fudan University (China), Institute for Security and Development Policy (U.S.) and Study Centre at the University of Peshawar (Pakistan).

The meeting allowed us to exchange views on the current state of cooperation between Central and South Asian countries, as well as on the possibilities of developing ties in the transport and logistics, infrastructure, energy, trade and economic spheres between the two regions.

Opening the event, ISRS Deputy Director Sanjar Valiyev informed the meeting participants about the international conference “Central and South Asia: Regional Connectivity. Challenges and Opportunities”, initiated by the President of the Republic of Uzbekistan Shavkat Mirziyoyev at the 75th session of the UN General Assembly.

The event, according to Valiyev, is designed to create a solid conceptual basis for closer interaction between the two regions and filling the interregional agenda with specific projects of a strategic nature that could reveal the enormous unrealized potential of cooperation.

CAREC Deputy Director Iskandar Abdullayev highly appreciated the significance of the forthcoming conference for further sustainable regional growth. In his opinion, the initiative of the President of Uzbekistan to strengthen trans-regional connectivity puts all the countries of Central and South Asia in an advantageous position.

According to Timofei Bordachev, Programme Director of the Valdai Discussion Club, the expansion of ties between Central and South Asia contributes to strengthening stability and security in the two regions, which is in the interests of all major non-regional players, including Russia.

The meeting participants agreed that it is important for the countries of Central and South Asia not to be limited to traditional spheres of interaction. According to them, one of the promising areas could be cooperation in the implementation of digital technologies.

The results of the event made it possible to identify a whole list of promising areas of cooperation between the regions of Central and South Asia, the establishment of close interaction.