During the event, President Shavkat Mirziyoyev emphasized the dynamism and sustainability of the comprehensive development of relations between China and Uzbekistan, as well as with the Central Asian region as a whole.

In this context, the leader of Uzbekistan announced a number of initiatives aimed at further expanding cooperation in a number of areas. In particular, the joint promotion of the "climate" agenda and "environmentally friendly development" is designated as a relevant area of ​​cooperation between the PRC and the states of the region.

In this regard, Tashkent proposed, within the framework of the Green Silk Road initiative, to develop a Roadmap for cooperation to attract Chinese investments and technologies in the field of alternative energy.

It should be noted that the countries of the region, like China, are already experiencing the negative consequences of climate change, whether it be desertification, sandstorms, floods and other natural disasters, which in one way or another put a burden on national economies, hinder the sustainable development of states and require adoption immediate action, both at the national and interstate levels.

Taking into account this proposal stated by Shavkat Mirziyoyev, it seems to be a step towards the implementation of the priorities fixed in the strategic documents for the development of Uzbekistan in the coming years. In particular, the country plans to increase the share of renewable energy generation to 25% by 2026, and to reduce greenhouse gas emissions by 35% by 2030, increase the energy efficiency of the economy by 20% and reduce emissions of harmful gases into the atmosphere by 10%.

At the same time, Tashkent's initiative is in the interests of all countries participating in the dialogue on the transition to a "green" economy and taking measures to adapt to the effects of climate change, which are reflected in the conceptual documents of the Central Asian states.

Thus, the Development Strategy of Kazakhstan until 2050 provides for a transition to a low-carbon economy, as well as to alternative and renewable types of energy. The Green Economy Development Program for 2019-2023 is being implemented in Kyrgyzstan. The National Development Strategy of Tajikistan until 2030 defines renewable and environmentally friendly energy sources as the basis of the "green" economy. The implementation of the state program of Turkmenistan on energy saving for 2018-2024 also provides for an increase in the role of renewable energy sources (RES).

In turn, China aims to become a carbon neutral country (reducing net CO2 emissions to zero) by 2060 and is already taking drastic measures in this direction.

With this in mind, the proposal of the head of Uzbekistan to develop a "Roadmap" of cooperation to attract Chinese investment and technology in the field of alternative energy seems to be very timely. In particular, it can contribute to the implementation of national strategies and programs of the countries participating in the China-Central Asia dialogue.

Moreover, the adoption of this document will be a practical step towards strengthening regional cooperation in jointly addressing issues of climate change mitigation and adaptation to it.

Chief Researcher of ISRS under

the President of the Republic of Uzbekistan. 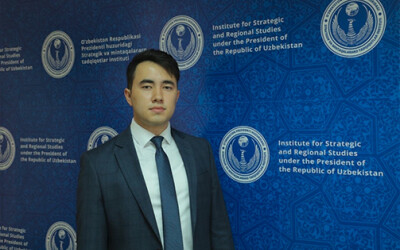 On January 25, President of Uzbekistan Shavkat Mirziyoyev took part in the online summit of the heads of state of Central Asia and China. During his speech, the head of our state put forward an initiative to create a joint platform "Intellectual Silk Road" based on the IT parks of the Central Asian countries and China.