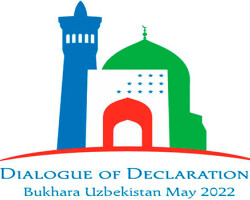 On May 19, 2022, representatives from government, civil society, scholarly experts, and religious leaders from 10 countries gathered in the city of Bukhara for a multi-faith dialogue that focused on protecting and promoting freedom of conscience or belief of everyone, everywhere, and advancing multi-faith tolerance, understanding, respect, and countering violent extremism From May 16-20, 2022, the Institute for Global Engagement (IGE) and the Institute of Strategic and Regional Studies under the President of the Republic of Uzbekistan (ISRS) conducted the “Dialogue of Declarations,” a groundbreaking multi-faith initiative to “protect and promote freedom of conscience or belief of everyone, everywhere.” Tashkent, Samarkand and Bukhara will host The International Forum "Dialogue of Declarations".

On 16-20 May 2022, The International Forum "Dialogue of Declarations" will be held in Tashkent, Samarkand and Bukhara.