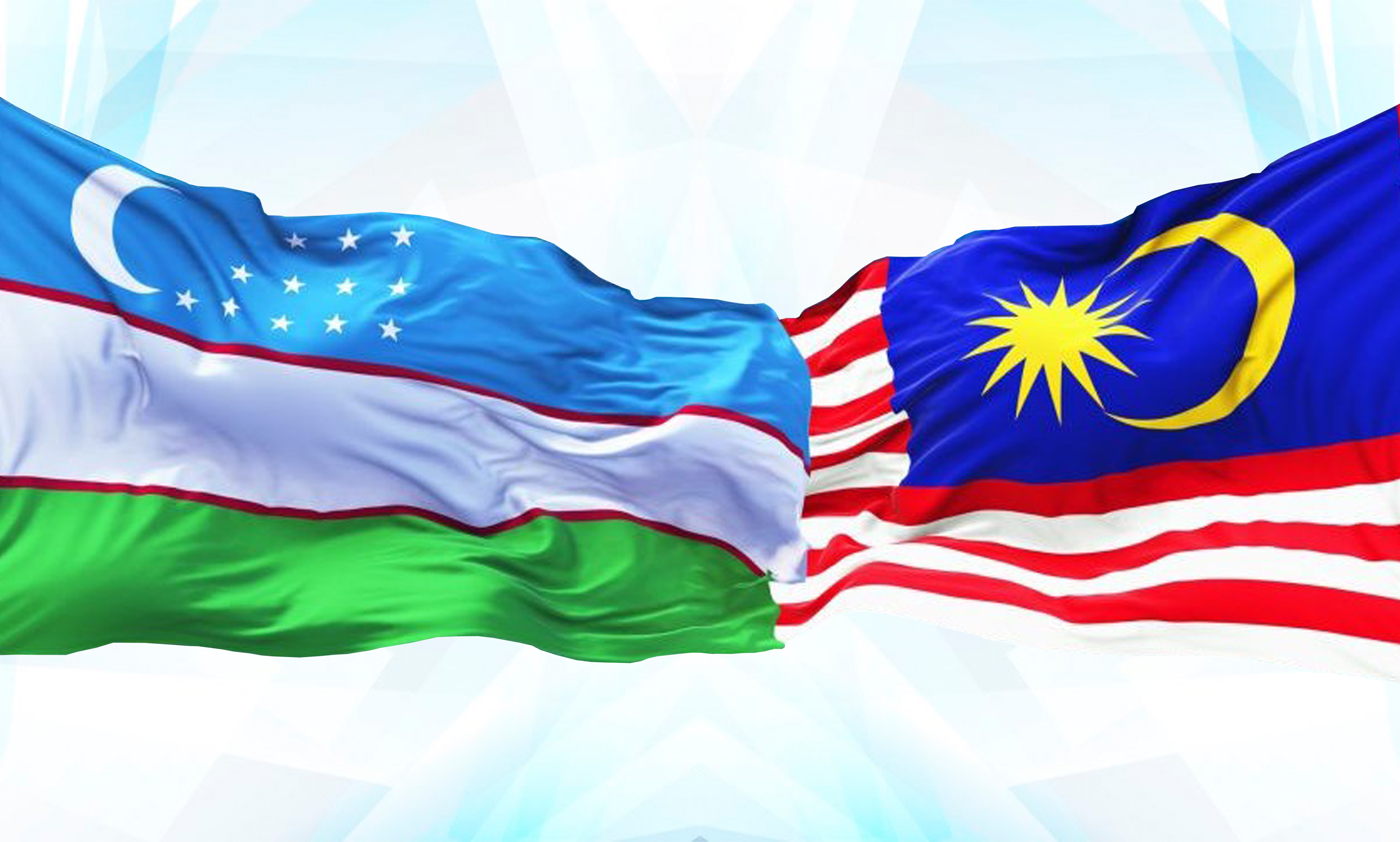 The proactive and pragmatic foreign policy of Uzbekistan is based on the principles of mutual respect and consideration of common interests. This policy line contributes to the expansion of symbiotic and multifaceted cooperation with both international organisations and the countries of near and far abroad. The diplomatic activity of Uzbekistan is rapidly expanding beyond the neighbouring regions. A vivid example of this is the gradual expansion of the geography of relations with Southeast Asian states.

Over the course of time and among the states of Southeast Asia, Malaysia is now considered as a reliable and key partner state. To a greater extent, this is facilitated by the traditionally high level of political trust between the countries, and the very friendly nature of relations that have been established since Uzbekistan gained its independence. Malaysia was one of the first economies to recognise the independence of Uzbekistan in 1992.

Today, both Malaysia and Uzbekistan have come to the turn of the 29th anniversary of the establishment of diplomatic relations. Despite geographical remoteness, Tashkent and Kuala Lumpur are actively looking for new opportunities in order to expand the political, economic, cultural and humanitarian dimensions of cooperation that provide a new impetus to interstate relations.

It is worth noting that inter-parliamentary ties are developing dynamically. In 2019-2020, a series of meetings took place between parliamentarians of both countries. Strengthening and stimulating the relations between the parliaments of the two states contributes to the coordination of actions and exchange of experiences in the field of lawmaking. Moreover, the inter-parliamentary friendship group “Uzbekistan-Malaysia” is functioning at a heightened level.

Another important mechanism for promoting bilateral ties is political consultations between the Ministries of Foreign Affairs of Uzbekistan and Malaysia. In September 2019, the fourth round of inter-ministerial consultations was held in Tashkent at the level of deputy foreign ministers.

The economic and trade cooperation, one of the key elements of interaction, is expanding as well. Trade exchange between the two countries continue to show steady growth dynamics. In 2020, the mutual trade turnover between the two countries accounted for US$75.76 million, including export from Uzbekistan which amounts to US$11.7 million. There are 31 enterprises – including 21 with 100 per cent Malaysian share – in oil and gas, textile, furniture, electrotechnical products, financial and tourism services, and other areas, operating in Uzbekistan with the share of Malaysian investors.

The most important aspect for Tashkent and Kuala Lumpur is to strengthen mutually beneficial relations in a number of such joint cooperation projects as the extraction and processing of natural gas, the production of electrical, chemical and textile products, trade operations, tourism, and consulting services.

The cooperation for the development of internal regions of both countries has been established, which creates a favourable climate for the development of relations between Malaysian and Uzbekistan. In 2018, a delegation of the Khorezm region, headed by the head (khokim) of this region, visited Malaysia. As a result, the Uzbek delegation signed contracts with Malaysian investors, which have triggered an investment flow of more than US$250 million.

Both countries pay great attention to the development of cooperation in the cultural, humanitarian, scientific and educational spheres. Currently, more than 200 Uzbek students are studying in various tertiary institutions in Malaysia, which is considered one of the world’s largest hub in terms of educational services. Malaysia has a reputation of being a regional hub in terms of higher education for students from Asia – and the rest of the world.

It is also worth noting that the total percentage of Uzbekistan students account for more than 50 per cent in Malaysia’s tertiary education. About 38.8 per cent of Uzbekistan’s state budget was allocated to finance the education system. At the same time, large national companies widely finance various forms of training to upgrade the professional skills of their personnel as well.

Guided by such aspirations, the parties have already launched the first pilot project. Branches of leading Malaysian universities were launched in Tashkent, which are in high demand among Uzbek applicants. In 2019, on the basis of the Tashkent Financial Institute, the Uzbek-Malaysian joint faculty was officially established and set in motion to receive applications. In 2020, in cooperation with the Malaysian University of Management and Entrepreneurship “Binary”, the International University “Binary” was founded in the city of Urgench.

With regards to the field in tourism cooperation, Malaysia and Uzbekistan could further enhance the already strong bilateral relations by tapping into multiple fields of potential that are available. A pilgrimage tour to Uzbekistan, which is considered one of the historical centres of Islamic civilisation, is highly popular among citizens of Muslim states. It is no coincidence that with the introduction of a visa-free regime in 2018-2019, the flow of tourists from Malaysia, where Muslims make up more than half of the country’s population, increased by 158 per cent.

Moreover, the partnership and cooperation between the leading analytical centres of the two states is strengthening. The think tanks of Uzbekistan and Malaysia are ready to assume the role of a kind of generator of ideas for identifying new promising areas of interaction. In this regard, the signing in 2018 of Memorandums of Understanding (MOUs) between the Institute for Strategic and Regional Studies (ISRS) under the President of the Republic of Uzbekistan and the Institute for Strategic and International Studies (ISIS) Malaysia, and the Asian Strategy and Leadership Institute (ASLI), should be highlighted as well for commandeering official contacts in the field of academia, experts, foreign dignitaries and diplomats.

These agreements allow the convening of regular expert meetings to exchange views on the current state of cooperation. The last meeting was held in December 2020 between ISRS Uzbekistan and ISIS Malaysia. The results of the event have demonstrated the presence of significant potential – to be able to tap into such potential will allow the mutually beneficial cooperation to expand between the two countries.

In the past several years, favourable preconditions have been created to enable Tashkent and Kuala Lumpur to make meaningful changes in bilateral relations, which will become an important platform for bringing relations to a higher level.

First, leaders of both countries are pursuing a large-scale programme of reforming economic transformations, which ensures high rates of economic growth. Presently, under the leadership of President Sh.M. Mirziyoyev, Uzbekistan has moved to a new stage of internal reforms, which are already yielding very positive results in terms of modernising the economy, enhancing its competitiveness, attracting foreign investment and progressively increasing the welfare of the population.

In turn, Malaysia is moving towards obtaining the status of a country with the highest income. Launched in 2019, the Vision for Prosperity 2030 strategy aims to transform Malaysia into the economic hub of Asia by 2030. The political and economic transparency, a well-functioning regulatory framework, a strong banking market, mitigating financial policies, the creation of cyber cities and scientific research parks as well as human resource development are the main engines of Malaysia’s economic development.

Secondly, against the backdrop of the pandemic, both countries have successfully set the control over the epidemiological situation and demonstrated a responsible policy in relation to both citizens and external partners. Despite the negative consequences of the pandemic, experts forecast the growth of Malaysian GDP from 6 per cent to 7.3 per cent, and Uzbekistan’s up to 4.8 per cent this year.

Thirdly, the desire of Uzbekistan to overcome the country’s transport isolation and venture in new promising markets through the implementation of various transport corridors will help create new opportunities to remove geographic barriers, which is hindering the development of interactions with Malaysia. Such a prospect coupled with plans from the Uzbek side to join the World Trade Organization (WTO) will significantly intensify the dynamics of trade and economic exchanges between the two states in the near future.

Fourthly, Uzbekistan is rapidly moving towards the digitalisation of its economy. Until 2022, it plans to implement 268 projects in the republic, aimed at developing the electronic government system, telecommunications, the Technological Park of software products and information technologies, as well as the introduction of digital technologies in the economy, and agriculture and water tech nexus. Such aspirations of our country makes Malaysia a natural partner in this area, since Malaysia is already ahead of most countries in the ASEAN region in implementing the principles of the digital economy.

Fifth, Uzbekistan and Malaysia have similar goals to diversify trade relations and strengthen positions in new markets. Uzbekistan, located in the heart of Eurasia, could turn into an important commercial and industrial base for Malaysian companies in this vast region. Meanwhile, Malaysia’s geographic location at the junction of international sea trade corridors gives it strategic economic and trade advantage. It can serve as a gateway for Uzbekistan to reach the Southeast Asian region, which has a great consumer market and established itself as a new locomotive of the global economy.

In this regard, one can surely state that Uzbekistan and Malaysia are long-term partners whose interests coincide in most areas of interaction. The complementary nature of the national development strategies of Tashkent and Kuala Lumpur, the rapidly changing economic situation in the world, and the emerging new model of the global economy and trade, will undoubtedly contribute to an even greater rapprochement between the two countries.

Aziz Karimov,
Abror Madimarov
Leading research fellows
Institute for Strategic and Regional Studies
under the President of the Republic of Uzbekistan