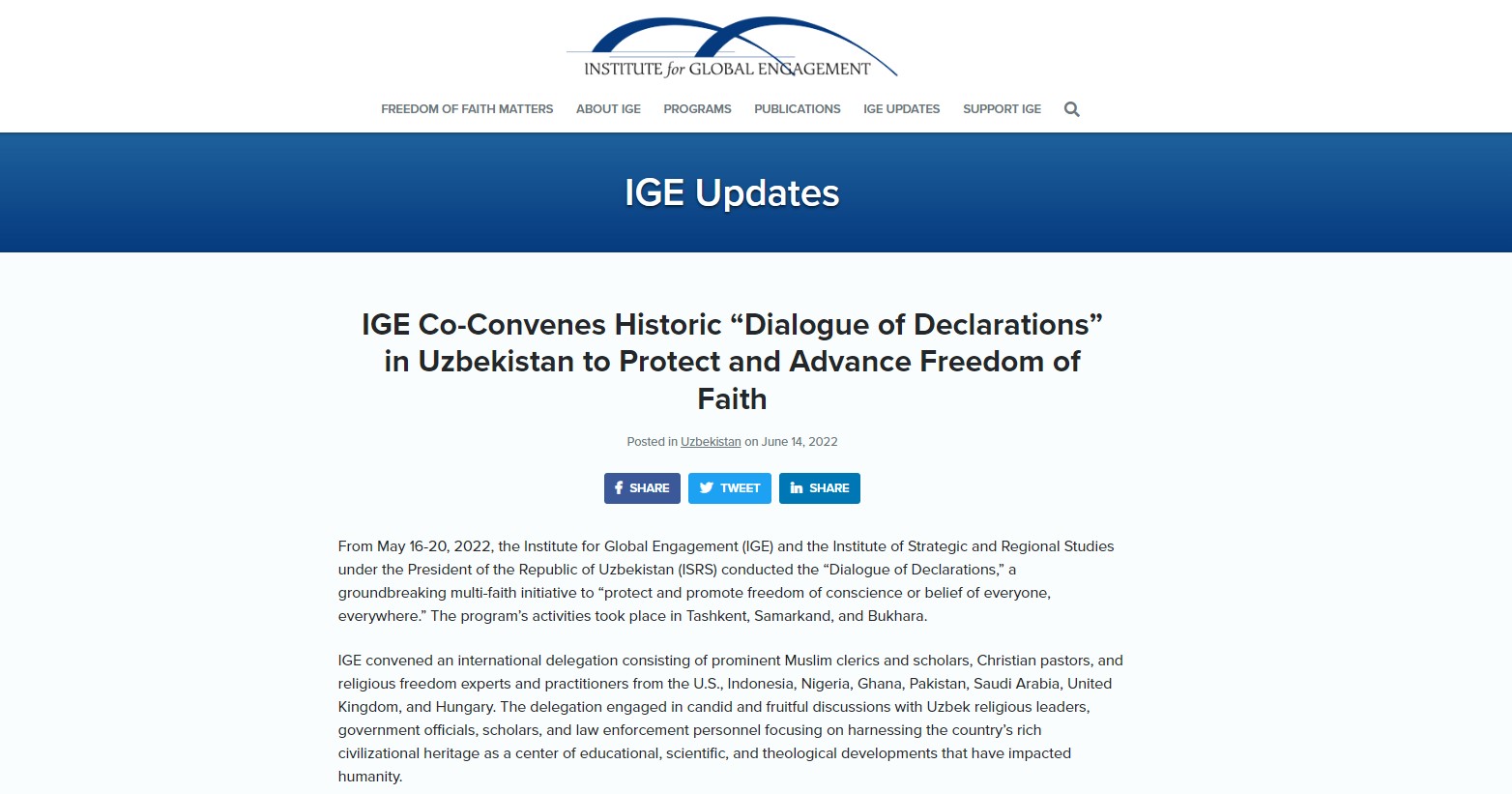 From May 16-20, 2022, the Institute for Global Engagement (IGE) and the Institute of Strategic and Regional Studies under the President of the Republic of Uzbekistan (ISRS) conducted the “Dialogue of Declarations,” a groundbreaking multi-faith initiative to “protect and promote freedom of conscience or belief of everyone, everywhere.” The program’s activities took place in Tashkent, Samarkand, and Bukhara.

The Dialogue of Declarations featured leaders who played key roles in drafting recent major declarations on religious freedom and pluralism including the Makkah Declaration (2019), Marrakesh Declaration (2016), Jakarta Declaration on Violent Extremism and Religious Education (2018), Potomac Declaration (2018), UN Resolution on Religious Tolerance and Enlightenment (2018), and Punta del Este Declaration on Human Dignity (2018). The Dialogue culminated in the official adoption of the Bukhara Declaration, which commits to “protect, without reservation, everyone’s right to freedom of thought, conscience and religion, which includes freedom to change his religion or belief, and freedom, either alone or in community with others and in public or private, to manifest his religion or belief in teaching, practice, worship and observance.” The Declaration also calls for practical actions including increasing educational activities to promote multi-faith dialogue, equipping citizens with competencies and skills of mutual engagement to foster religious tolerance and human rights, and preserving religious establishments and places of worship.

In line with the Bukhara Declaration’s focus on practical actions and results, IGE conducted three certificate training programs in Religion and Rule of Law, Cross-Cultural Religious Literacy, and Multi-Faith Clerical Relationship Building in Tashkent. These trainings were conducted in partnership with the International Center for Law and Religion Studies at BYU Law and the Multi-Faith Neighbors Network and hosted by the University of World Economy and Diplomacy and the International Islamic Academy of Uzbekistan. Local religious affairs officials, religious leaders from the Muslim, Jewish, and Christian communities, law enforcement personnel, and academics participated in the training programs.

During the program, the international delegation conducted a study tour of religious heritage sites in Samarkand and Bukhara and visited places of worship for the country’s Muslim, Jewish, Russian Orthodox, Catholic, and Protestant communities. The delegation also participated in a reception at the invitation of the U.S. Ambassador to Uzbekistan Daniel Rosenblum and the U.S. Embassy in Tashkent.

“While religious freedom has drastically deteriorated worldwide in recent years, Uzbekistan has been the rare case where it has significantly improved, and the Bukhara Declaration demonstrates the country’s commitment to keep moving forward,” said IGE Vice President for Global Operations James Chen, who led the international delegation. “It’s truly an honor and privilege for IGE to walk alongside our Uzbek partners on this path.”

The Dialogue of Declarations builds upon IGE’s engagement of Uzbekistan since 2018 when it signed an MOU to build religious freedom with the Uzbekistan government.