The negotiations between President of Uzbekistan Shavkat Mirziyoyev and President of Turkmenistan Gurbanguly Berdimuhamedov continued in an expanded format with the participation of official delegations of the two countries.

The sides emphasized that thanks to joint efforts, the relations of the fraternal countries have reached a qualitatively new level of strategic partnership.

The Heads of State noted with satisfaction the dynamics of the growth of mutual trade in recent years and agreed to use all available resources and opportunities to further increase the volume of bilateral trade.

One of such directions is the expansion and diversification of the range of mutual supplies of demanded products with the creation of trading houses and access to the markets of third countries.

The development of industrial cooperation in various industries, including the assembly of cars, the production of chemical goods, electrical products and household appliances, the production of construction materials, deep processing of cotton fiber and fruit and vegetable products, the creation of logistics infrastructure are also identified as promising areas of cooperation.

The President of Uzbekistan proposed to prepare an appropriate roadmap.

The parties agreed to intensify cooperation in the field of transport and the development of transit corridors. The importance of joint promotion of the Ashgabat Agreement and the expansion of the use of the unique capabilities of Turkmenbashi Seaport was noted.

Joint coordinated efforts in this direction will increase the volume of cargo transportation and create favorable conditions for the disclosure of transit potential.

The importance of the fullest use of the potential of the regions of the two countries was emphasized. An agreement was reached to launch a new mechanism of cooperation – Regional Forums.

Cooperation in the water sector was highly appreciated. The sides welcomed the successful holding of the first meeting of the Intergovernmental Commission on Water Management Issues. The start of the project of reconstruction of Sultansanjar dam of Tuyamuyun Reservoir was noted with satisfaction.

Issues of cooperation in the cultural and humanitarian sphere, which is an important factor in strengthening friendly relations and increasing mutual understanding between the two peoples, were also discussed.

Holding mutual Days of Culture and Cinema, organizing tours of theater and musical groups, meetings of representatives of scientific intelligentsia and other similar events will bring our peoples closer together.

In this context, Turkmenistan's support for the initiative to revive the legendary Tashkent International Film Festival “Pearl of the Silk Road” was noted.

The President of Uzbekistan stressed that today more than 200 thousand citizens of Turkmen nationality live in the country. They live in peace and harmony, a single friendly family with representatives of all other nations and nationalities that make up the multinational people of Uzbekistan.

“We will continue to create all conditions for them to develop their native language, culture, traditions and customs. I am sure that the Tashkent Park in Ashgabat, created on the initiative of the esteemed Gurbanguly Myalikgulyevich, will become another new symbol of friendship between our peoples”, Shavkat Mirziyoyev said.

It was noted that peace and stability in Afghanistan are the key to the sustainable development of the entire Central Asian region.

“We are ready to continue providing the necessary humanitarian assistance to the Afghan people, actively cooperate with Turkmenistan partners in the implementation of important socio-economic and infrastructure projects in this country”, the President of Uzbekistan said.

Following the event, the Presidents instructed the Co-Chairs of the Intergovernmental Commission on Bilateral Cooperation to prepare a roadmap with specific mechanisms for implementing the agreements reached. 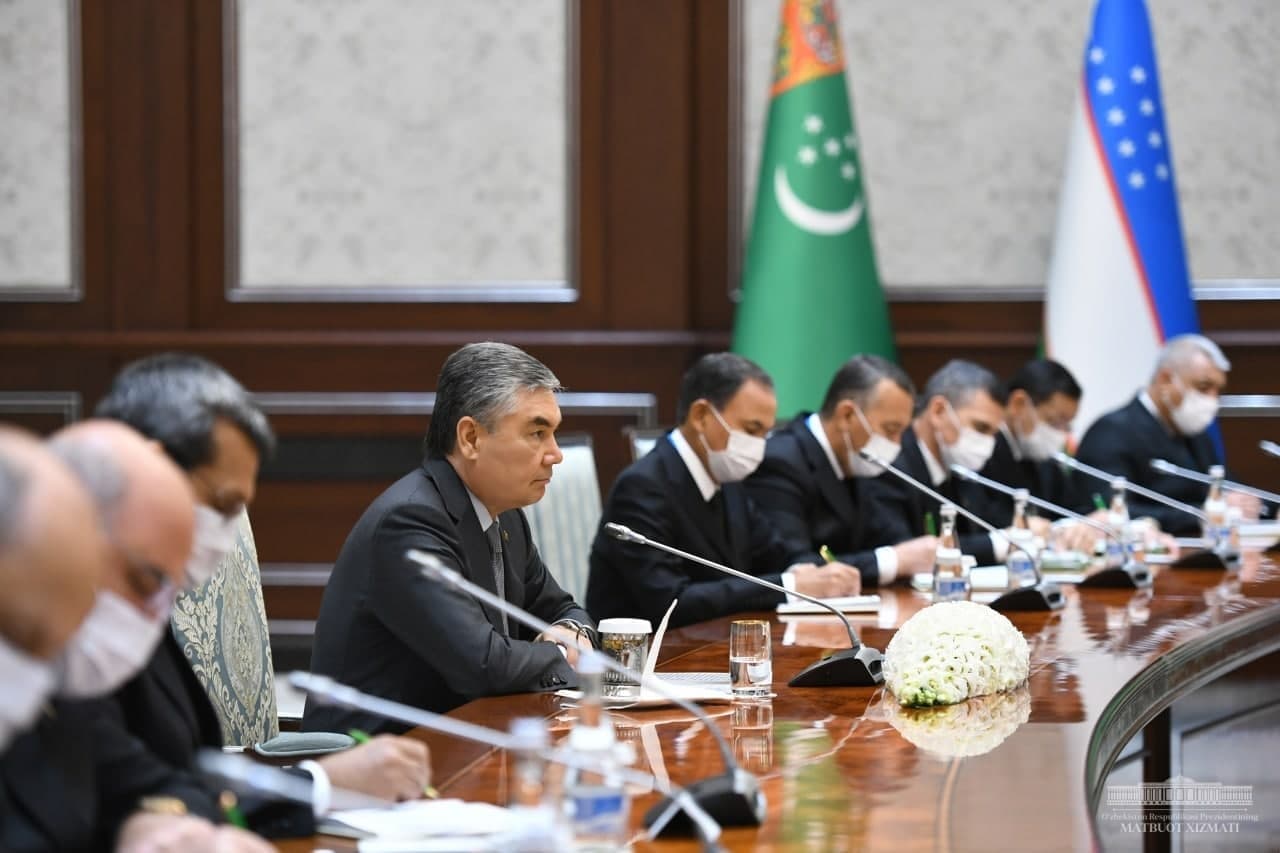 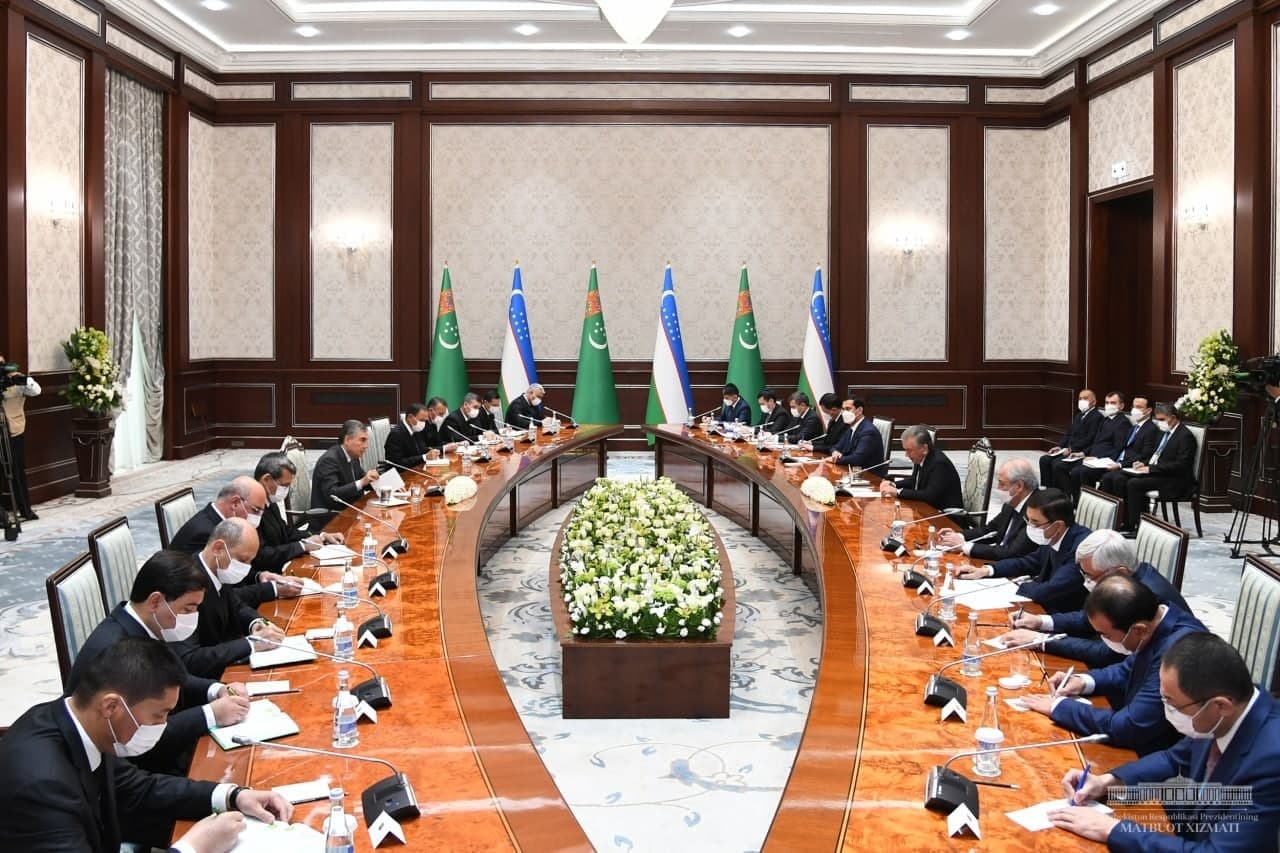 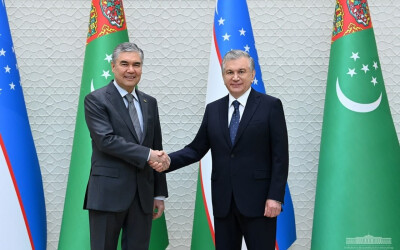 The official welcoming ceremony of the President of Turkmenistan was held at Kuksaroy Residence. 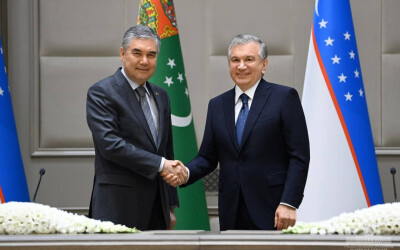 A solid package of documents signed during the visit

The documents signing ceremony was held following the negotiations.