Meeting with Ambassador of the USA

The Institute for Strategic and Interregional Studies under the President of Uzbekistan held a meeting with the Ambassador of the USA to the Republic of Uzbekistan Pamela Spratlen. During the meeting, two sides discussed the current state and prospects of cooperation between Uzbekistan and United States, as well as the socio-economic and socio-political reforms in the country.

P.Spratlen highly appraised the efforts of Uzbek leadership aimed at implementing comprehensive reforms within the country and promoting a pragmatic, proactive and constructive foreign policy. The adoption by the UN General Assembly of the resolution "Strengthening regional and international cooperation to ensure peace, stability and sustainable development in Central Asia" initiated by Uzbekistan, was one of the significant achievements of Tashkent in creating an atmosphere of mutual trust and good neighborliness in the region.

About the state of Uzbek-American relations, P.Spratlen stressed that the visit of the President of the Republic of Uzbekistan to the USA in May 2018 created favorable conditions for development of multifaceted cooperation in all areas of mutual interest. The US administration is interested in strengthening independence and sovereignty of the Republic of Uzbekistan, rendering its support in improving economy, business climate and international image.

The US administration supports the policy of Uzbekistan in Central Asia, including Afghanistan and its’ efforts aimed at promoting an idea of solving the Afghan problem through diplomacy and peace talks. 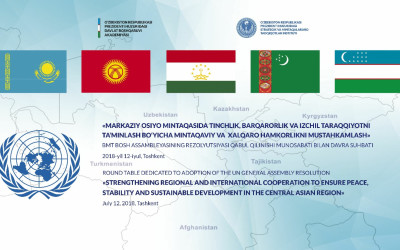 Tashkent to host round table dedicated to the discussion of the UN General Assembly resolution titled “Strengthening regional and international cooperation to ensure peace, stability and sustainable development in the Central Asian region”.

On 12 July 2018, a “round table” dedicated to the discussion of the UN General Assembly resolution titled “Strengthening regional and international cooperation for ensuring peace, stability and sustainable development...