Uzbek-Swedish “round table” at the ISRS

On January 31 the ISRS held a joint round table on “Regional Cooperation in Central Asia and the Development of Uzbek-Swedish Relations” with the parliamentary delegation led by the First Deputy Speaker of the Riksdag of the Kingdom of Sweden Åsa Lindestam. During the event participants shared their views on the current state and prospects for the development of bilateral cooperation between Uzbekistan and Sweden.

It was noted, that in the recent years, there has been a steady intensification of Uzbek-Swedish relations in the political, trade, economic and cultural fields. Inter-parliamentary relations demonstrated a positive trend as well. The Senate of the Oliy Majlis of the Republic of Uzbekistan and the Riksdag of Sweden (unicameral parliament) are developing partnerships ties. Need to note that this is a reciprocal visit of the parliamentary delegation of Sweden to Uzbekistan. Earlier in June 2019, Uzbek parliamentarians visited Stockholm and met with representatives of the Riksdag and the Ministry of Foreign Affairs of Sweden. Participants of the “round table”noted that the proactive foreign policy of Uzbekistan aimed at developing good neighborly relations in the Central Asian region has attracted great interest and support from foreign partners. The measures to intensify relations with all countries of the world, as well as to expand multilateral cooperation within the framework of the UN, OSCE, Organization of Islamic Cooperation, the Cooperation Council of Turkic-speaking states and other authoritative international structures contribute to boost profile of Uzbekistan in the international arena.

Sweden is also actively involved in the regional associations. The geographical position of the country determines its close interaction with the Nordic countries. Sweden along with Denmark, Iceland and Norway, is a founding member of the Nordic Council and the Nordic Council of Ministers, the main purpose of which is cooperation, integration and achieving the greatest sustainability of the development of their region by 2030. 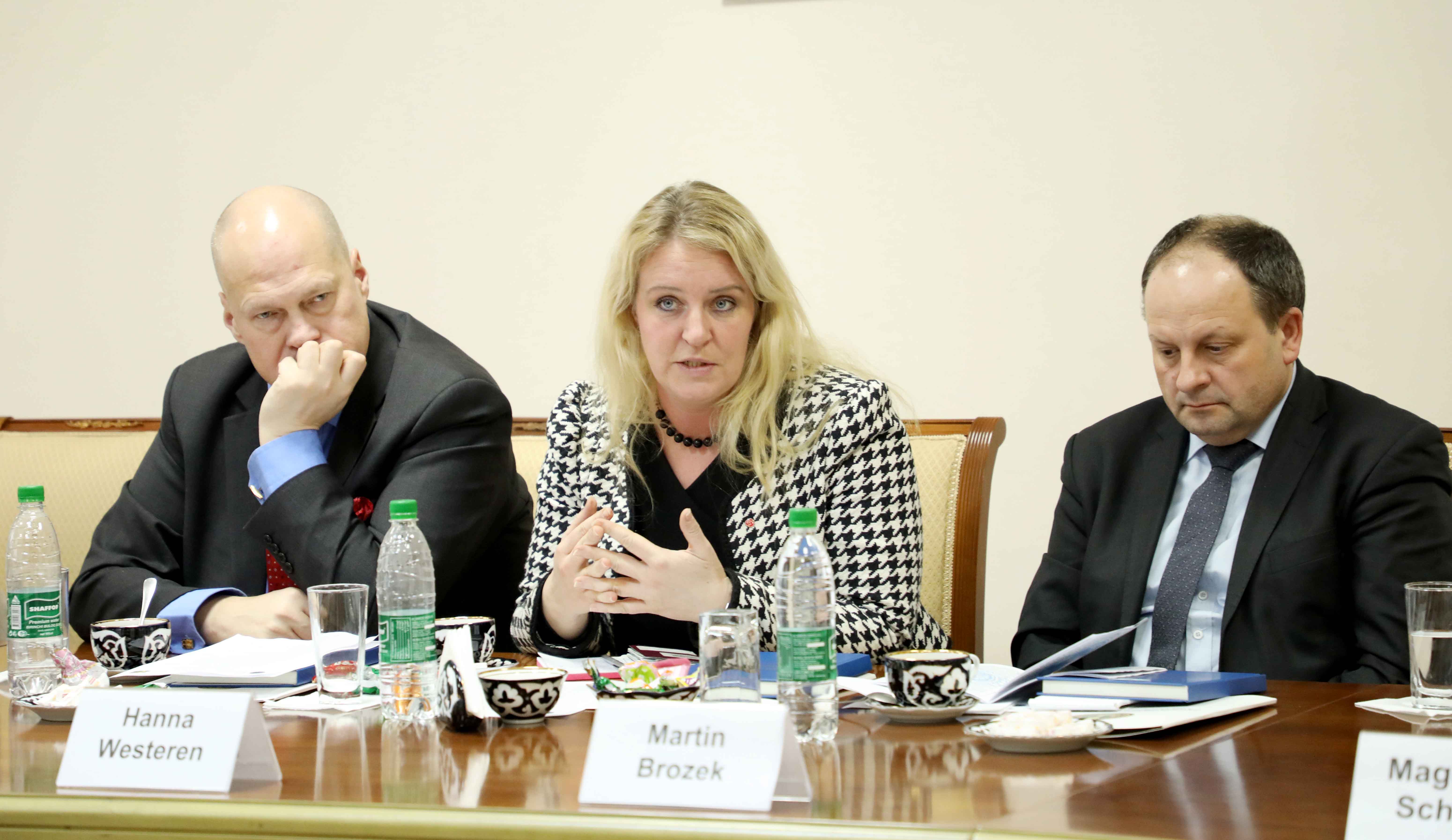 Therefore, experience of Sweden in regional and multilateral organizations is valuable for Uzbekistan, taking into consideration its new open foreign policy over the past few years.

The main topic of conversation was discussion of the problems raised by the President of the Republic of Uzbekistan Sh.Mirziyoyev in his Message to the Oliy Majlis and possible ways of solving them in the framework of international cooperation.

It was noted that over the past years, Uzbekistan has been taking fundamental measures to improve the education system. In 2019, educational institutions of a completely new type began to operate in Uzbekistan, including 4 presidential and 3 literary creative schools. Along with this, 19 new higher education institutions were created, including 9 branches of celebrated foreign universities. In cooperation with leading academic establishments abroad, training has been launched in the framework of 141 joint educational programs. In 2019, a total of 146,500 students were admitted to universities in Uzbekistan, which is double the number in 2016.

The government aimed to join the ranks of advanced nations, achievement of which only is possible through accelerating reforms, relying on science, education and innovation. At the same time, such countries as Sweden serves as a guideline for education and human development. In 2018, Sweden in human development index ranked 7th in the world. Public spending on education in relation to Sweden's gross output in 2018 amounted to 6.8%, which is 1.5 times higher than the average for 28 EU countries (4.6% of GDP).

As a result, educational attainment of the country's population significantly exceeds the global average. In 2018, the share of the population over 25 years of age with a secondary education was 91.1% (88.4% in 2009), while according to UNICEF, the percentage of those who completed secondary education programs in the world is only 69.3% in general.

Participants also paid special attention to cooperation on digital economy. It was noted that the head of state emphasized the importance of the country's accelerated transition to the digital economy for the next five years. Despite the fact that in the International Index of Information and Communication Technologies Uzbekistan has risen by 8 positions in 2019, country still vastly lag behind on this front.

The formation of a digital economy will require appropriate infrastructure, immense resources and specialists. Meanwhile, Sweden made a breakthrough in the development of digital technologies and telecommunications. The share of information technology in the country's economy has grown to 16%, and 6% of the working-age population has employed in the IT industry. The vivid examples of this fact is that Sweden is the motherland of prolific global brands like Skype or Spotify. The share of the population using the Internet has doubled in the 21st century - from 45.7% in 2000 to 95.5% in 2017.The internet connection has high data rate communications: in 2019, the country ranked 9th (out of 175) in terms of fixed broadband Internet speed and 13th (out of 140) in terms of mobile data transfer speed.

Participants also paid attention to discussing issues of improving the well-being of people and strengthening their social protection. It was noted that there is a very clear understanding that poverty reduction requires the implementation of a comprehensive economic and social policy – from stimulating entrepreneurial activity to mobilizing the abilities and potential of the population, creating new jobs. In 2019, reforms resulted in the establishment of 93 thousand new business entities, almost double the 2018 figures. In the Doing Business ranking of the World Bank, Uzbekistan has risen by 7 positions to come 8th among 190 nations in terms of business registration, and is among the best reformer countries. 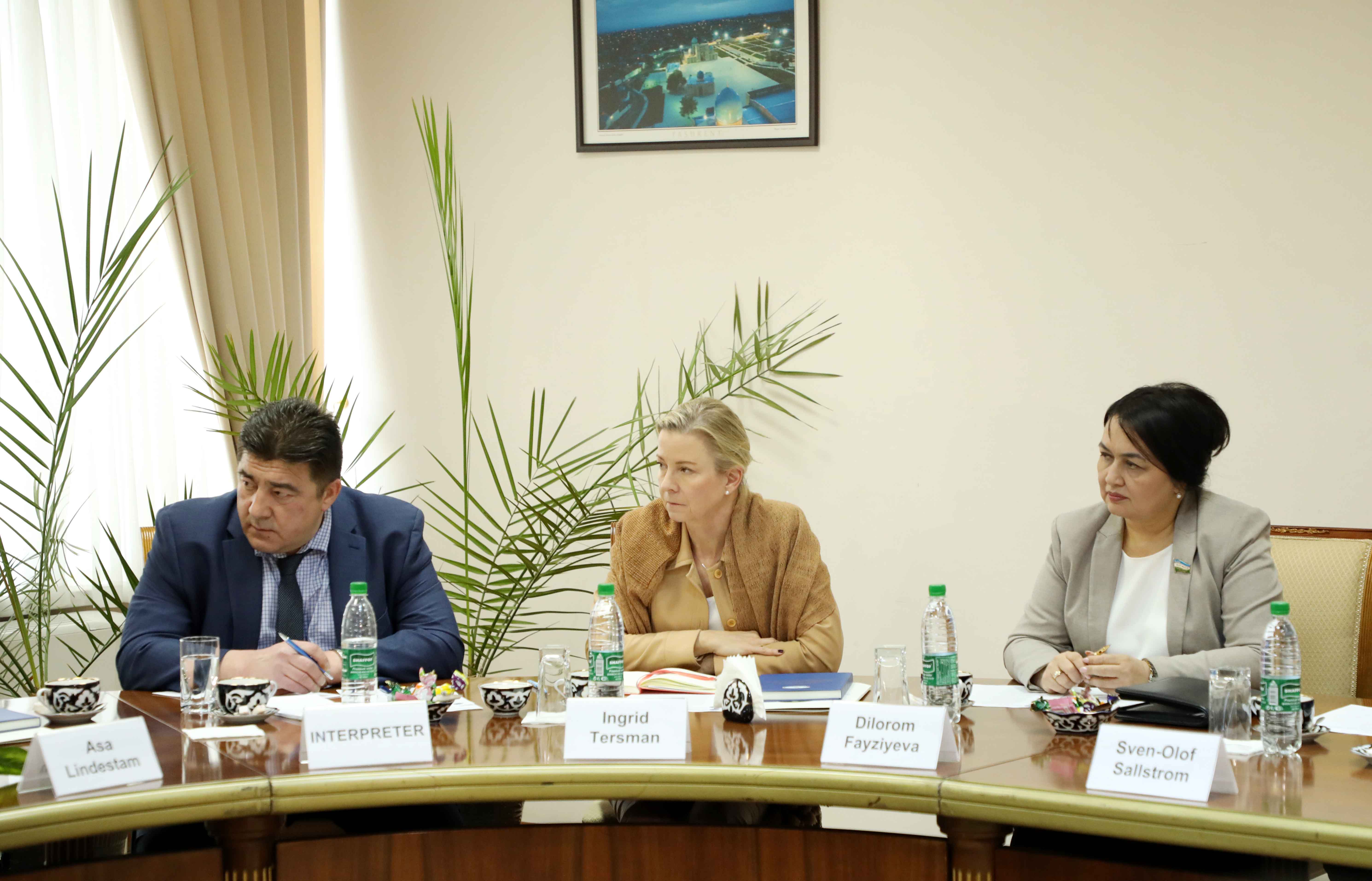 In this context, Uzbekistan is conducting systematic work to support entrepreneurship among youth and women In 2020, a total of 100 billion soums of soft loans will be allocated for the implementation of business projects by 5.5 thousand women.

In this context, the distinctive feature of Sweden is its great number of small businesses that is accounting for 99% of all registered companies and providing 80% jobs in the country.

In terms of healthcare, it should be noted that thanks to measures taken in this area in Sweden, life expectancy reached 82.3 years that is 2.2 years longer than the average in OECD countries and 9.9 years in the world in general. In the same year, life expectancy in Uzbekistan reached 73.8 years.

Participants of the event also focused on ecological issues and improving the environmental situation in the country. One of the directions in this area is the transition to the green economy. In Uzbekistan, the share of renewable energy sources is currently insufficient. It is planned to bring it up to 25 percent by 2030. Besides it in the field of domestic waste processing, existing facilities provide processing of only 6% of municipal solid waste (894 thousand tons out of 14-14.5 million tons). Sweden effectively uses “green” principles in all sectors of its economy and it is considered the world leader in producing renewable energy. It is noteworthy that while common goal of the European Union is to bring the share of renewable energy sources to 30% by 2030, Sweden intends to rise its share up to 50%. Sweden aims to become carbon neutral by 2045. Industrial giants such as Volvo, Electrolux, ABB and other companies organized subsidiaries that began to specialize in the development and implementation of modern energy-efficient equipment.

Sweden is also well known for its experience in the processing household waste and the generating electricity in terms of energy and resource saving. The 97% of country’s household waste is recycled, which can be considered as one of the highest rates in the world.

The ISRS experts and the high level delegation of the Swedish Parliament paid main attention to discussing abovementioned and other topics of possible practical interaction and cooperation, as well as search for new promising areas. 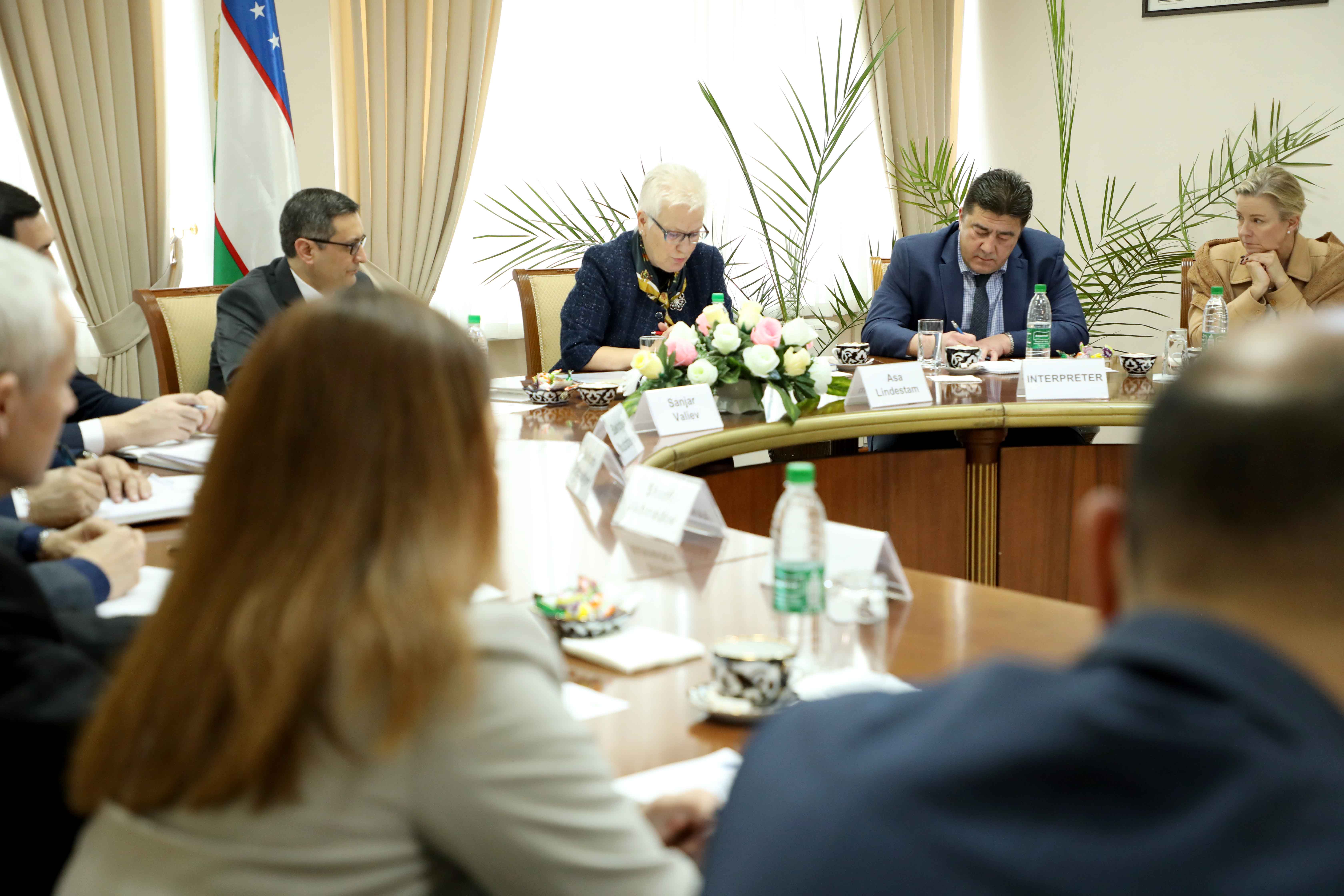 At the end of the meeting, the ISRS experts provided concrete and practical proposals to Swedish delegation on promising areas of Uzbek-Swedish development in bilateral and multilateral formats. The sides reached agreements on establishing contacts between the ISRS and leading world research centers based in Stockholm. The parties highly valued bilateral relations that are experiencing an unprecedented period of growth and entering a historically new stage of development.