About the meeting with the vice-president of "Marmara Group"

In ISRS, a meeting was held with the Turkish delegation headed by Ali Riza Arslan, vice-president of the Marmara Group's Strategic and Social Research Foundation. The meeting discussed the opportunities and problems of expanding investment ties in terms of development of the tourism industry and hotel infrastructure.
During the meeting, A.R.Arslan noted that his company Emsaş participates in tenders for the construction of Tashkent city, Samarkand city and hotels in Bukhara and Khiva.
According to him, Uzbekistan has a huge tourist potential, which attracts many investors and tourists. In particular, on February 10 this year the government of Uzbekistan introduced a visa-free regime for a period of 30 days for citizens of seven countries, including Turkey, which served as a sharp increase in the number of tourists and will contribute to improving the investment attractiveness of the country. The number of citizens of Turkey who visited Uzbekistan in 2017 reached 47 thousand people. In March of this year the number of Turkish tourists was 6 thousand people, which makes it possible to predict further growth of the flow.
Taking into account the strategic nature of the Uzbek-Turkish relations, the Turkish businessman, being vice-president of the Marmara Group Foundation, announced the following proposals:
- conducting joint research of the Marmara Group Foundation with ISRS aimed at developing proposals for the diversification of the economy of Uzbekistan, in the sphere of attracting direct investments into the country's tourism;
- organizing seminars and events to increase the investment attractiveness of Uzbekistan for potential investors in Turkey;
- creating Uzbek-Turkish working groups to support the development of priority areas of cooperation in order to strengthen contacts between business circles of the two countries. 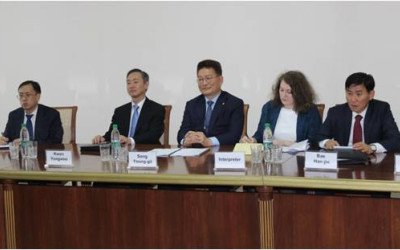 The Institute for Strategic and Interregional Studies under the President of Uzbekistan held a meeting with the delegation headed by Chairman of the Presidential Committee on Northern Economic Cooperation Song Yong-gil.