Primary results and prospects
August 15, 2017, the President's Decree "On measures for the further implementation of the Strategy of Action for the five priority development directions of the Republic of Uzbekistan in 2017-2021" was adopted.

In the ISRS discussed the draft of the State Program
On January 15, 2018, In the ISRS was held a round table dedicated to the discussion the draft of State Program for the realization of the Strategy for Action on the five priority development directions of the Republic of Uzbekistan in 2017-2021 in the Year of Support of Active Business, Innovative Ideas and Technologies.

Basic principles and directions of the Republic of Uzbekistan's defense policy
Structural and gradual implementation of large-scale works on the of the establishment of a modern, mobile Armed Forces capable of effectively solving tactical and strategic tasks to ensure security, stability and independence of our country its borders during the years of independence.

On the meeting with the PRC Ambassador in Uzbekistan
At the Institute of Strategic and Regional Studies under the President of the Republic of Uzbekistan, a meeting was held with Ambassador Extraordinary and Plenipotentiary of the People's Republic of China Sun Lijie. During the conversation, the state and prospects of bilateral Uzbek-Chinese cooperation were discussed. 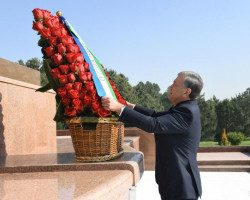 Uzbekistan has started celebrating the twenty-eighth anniversary of national independence. Today, President Shavkat Mirziyoyev has thus visited the Mustaqillik (Independence) Square in the heart of Tashkent and laid flowers at the Monument of Independence and Humanism... 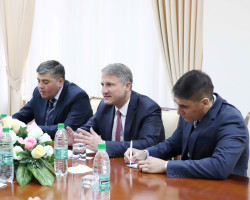 The ISRS held a joint Uzbek-Indian «round table» on the topic “Uzbekistan-India: prospects for cooperation in the security field”. The event was attended by Indian delegation led by the Deputy National Security Adviser to the Prime Minister of India Pankaj Saran.